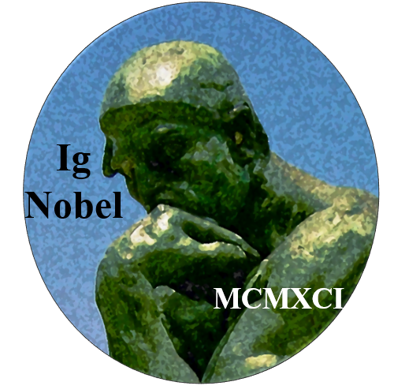 Do you want to learn about how the material of pants affects the sex life of rats?  Or about the different personalities of rocks? How about someone who invented prosthetic limbs to mimic the movement of goats?

These are only a few examples of hilarious research studies that received this year’s Ig Nobel prizes. The Ig Nobel awards are presented by the Improbable Research group based in Cambridge, Massachusetts, who awards these prizes in order to “first make people laugh and then make them think.”

The most recent Ig Nobel awards ceremony was held this past September, making this the 26th year of the Ig Nobel awards. Each year, 10 prizes (of a small money award and recognition) are awarded in subjects such as economics, physics, medicine, peace, literature, and math. Maybe the most interesting part is that real Nobel Laureates are at each ceremony to hand out awards. The Ignoble awards even have their own mascot, “The Stinker,” which is based on the famous statue “The Thinker,” except that theirs has fallen off of its pedestal.

While looking through past Ig Nobel Awards, I selected 5 favorites to share with you:

1. Ponytail Physics, or “Shape of a Ponytail and the Statistical Physics of Hair Fiber Bundles.” This research investigates the “bending elasticity, gravity, and orientational disorder” of the hairstyle beloved by grad student girls (and boys) everywhere during rushed mornings.

2. Doggie Bathroom Habits, a.k.a. “Dogs are sensitive to small variations of the Earth’s

magnetic field.” These Czech researchers observed 70 dogs from 37 different breeds defecate and urinate over 7,000 times, ultimately discovering that dogs prefer to align their bodies with north-south geomagnetic lines while relieving themselves. Maybe you can make some observations of your own the next time you take your dog on a walk!

3. “Human Digestive Effects on a Micromammalian Skeleton.” This dedicated researcher ate a dead shrew (without chewing) so that it would pass through his digestive system, and he could discover which bones his body would dissolve and which bones it would not. Who else is committed enough to research to swallow an animal whole and then pick through feces to find the bones?

5.“On the Reception and Detection of Pseudo-Profound

Bullsh*t”.  Beyond the amusing title and the fantastic opening line (“Although bullshit is common in everyday life and has attracted attention from philosophers, its reception…has not…been subject to empirical investigation.”), the research is actually interesting and applicable to everyday life – everyone knows at least one person who can expound at length on a topic without saying anything at all!

And… a bonus one: The Art of Procrastination.  This is an essential topic for graduate students (and anyone else who has work to delay).  John Perry lays out his theory of “structured procrastination,” a technique in which you accomplish certain tasks while avoiding other tasks.  A must-read for anyone who has work they don’t want to finish!

Besides the Ig Nobel awards, the Improbable Research group also runs a blog, publishes the Annals of Improbable Research (AIR) along with an associated newsletter (the mini-AIR), has a podcast and video series, and (maybe most interestingly) has a club called “The Luxuriant Flowing Hair Club for Scientists”.  They even have a cookbook!  However, they are quick to point out that they are not mocking scientific achievements but rather celebrating the often absurd nature of science.  Personally, I believe that they wish to enliven an often humorless, stressful, and dry field of study with science humor.

So the next time you have an urge to find the chemical recipe for unboiling an egg, check out some Improbable Research!