The Amazing Microbiota of Brown Bears 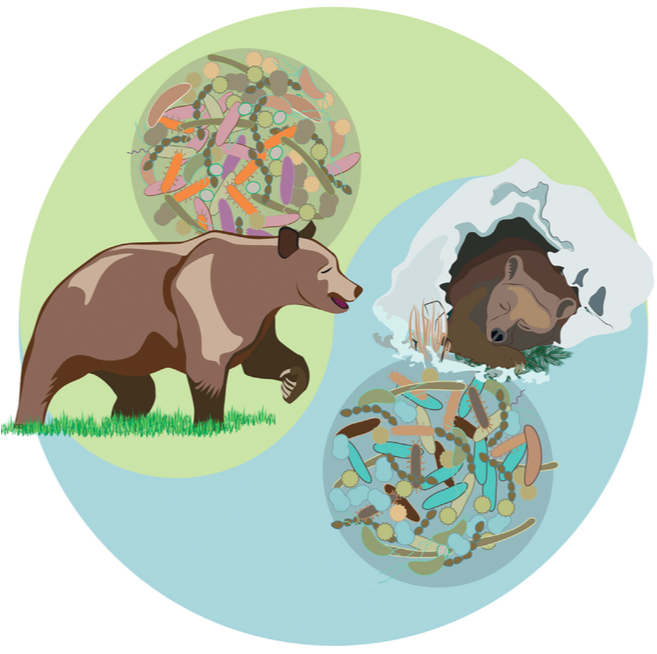 Image a researcher has been tasked with studying how hibernation affects a bear’s microbiota, or the collection of microorganisms residing on and in an organism. The researcher begins his day tracking brown bears until he finally finds one in a cave. His trusty veterinarian partner shoots a dart containing a potent mix of tranquilizers and narcotics at the bear. After waiting for the drugs to work, he cautiously moves towards the animal, kneels down, and collects a fecal sample straight from the bear’s rectum, sweating and praying that the bear won’t wake up to murder him.

At least that’s how I imagine the field work went for a study in Cell Reports on the gut microbiota and energy metabolism of Eurasian brown bears during hibernation. Brown bears switch between periods of heavy eating in the summer and fasting for up to half a year in the winter, during which time the bears do not eat or defecate and only urinate intermittently. Despite this extreme weight gain and obesity in the summer, bears remain metabolically healthy.

The researchers wondered how a bear’s microbiota changes throughout the seasons and how this might contribute to a bear’s healthy weight gain, and found that the bear’s gut microbiota and metabolism change with each season cycle. The researchers inserted the bears’ microbiota collected from either summer or winter into specialized mice. Soon, the mice’s own microbiota began resembling that of its summer or winter donor. Mice receiving the summer microbiota gained more fat and tended to be heavier. However, despite this increased fat mass, their glucose (sugar) tolerance was not impaired. In contrast, increased fat mass is associated with insulin resistance in humans. This suggests the bear’s microbiota plays a role in maintaining a healthy metabolism throughout its life cycle, despite extreme seasonal fluctuations in their body mass and energy metabolism. That is, the summer microbiota allow the bear to eat more without sacrificing its health.

Studies like this one underscore the importance of studying bear biology, as it may lead to advances in how we treat disease. Imagine if we attempted to mimic a bear’s yearly cycle. We would likely suffer from kidney failure, cardiovascular disease, and muscle loss, among numerous other conditions. Yet, miraculously, brown bears avoid all these conditions, with help from their gut bacteria. This study provides a link between a bear’s healthy obesity and its gut microbiota, which suggests that the gut microbiota may be an effective target for treating obesity. So next time you see a bear, thank him…and then play dead to avoid getting killed.