Yo-yo dieting and its effects on gut microbiota.

In 2019, about one in two people’s New Year’s resolutions include weight loss, “exercise more,” and “eat more healthy food”. The New Year definitely brings people courage and motivation for improving health and fitness. Losing weight at first might not be too hard to achieve, but maintaining the weight loss can be more difficult. Temptations from yummy late-night snacks or an extra dessert are too attractive to reject, but these are road blockers to your weight goal. Studies have shown that after a year, at least 1 in 3 people who tried to lose weight will gain it back; and after 2-5 years, some people will reach or even surpass their pre-intervention weight. The cycle of weight loss, weight gain, and subsequent dieting procedure is called yo-yo dieting, depicting the procedure that weight fluctuates as a yo-yo. 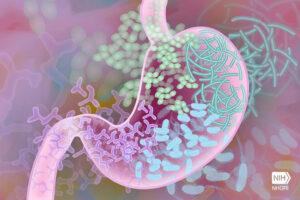 Yo-yo dieting is driven by physiological mechanisms that counter-regulate an individual’s behaviors to defend body weight from weight loss. This might include decreased energy expenditure, increased hunger, food reward behavior, and impaired communication between the brain and other parts of the body. The exact molecular mechanisms remain unknown, but body-environment interactions are believed to be likely drivers for the memory effect associated with prevention of maintained weight loss.

Weight loss and negative energy balance (means your energy output is greater than your energy intake) can alter the secretion of circulating hormones in the body such as leptin. Leptin is predominantly made by fat cells, and it will tell the brain how much fat is stored in the body. When people lose weight, they will lose body fat, and less fat means less leptin. Decreases in leptin will make you feel hungry, but your body slows metabolism to save energy at the same time. Taken together, dieting can lead to an oversized appetite which combined with a slower metabolism, might partially explain cycles of yo-yo diets. Yo-yo dieting is harmful to health because increased appetite (due to decreased leptin) leads to more weight gain over time, and increases the risk for diabetes and cardiovascular diseases.

Despite continuous medical and scientific efforts, long-term strategies to stop or reverse post-dieting weight gain haven’t achieved satisfying results. The trillions of microbes found in the human gut, known as gut microbiota, have been an emerging factor affecting human metabolic balance and the risk for obesity. Scientists from Israel found that the microbiome inside obese mice who had successful dieting and weight loss seems to have a “memory” of previous obesity. For those mice, if they are allowed to consume a high-fat diet again, the gut microbiota can accelerate the weight regain process. Scientists then studied how the microbiota can control the tendency to regain weight after dieting. They found out that the higher the levels of flavonoids (a group of plant-derived molecules that the gut microbiota metabolize), the slower the weight regain. They did this using obese mice who had undergone dieting and had low levels of flavonoids in their gut, and adding flavonoids back into the mouse’s guts prevented their rapid weight regain after dieting.

Previous studies proved that gut microbiota has an important role in weight management and metabolic dysbiosis. They also suggest that flavonoids might contribute to the scientific basis for future therapy development to ameliorate weight regain in formerly obese individuals. Clinical interventions such as transplantation of microbiota from people with healthy weights might be a good way to “erase the obesity memory” from the host with obesity, thus preventing the recurrence of extra fat.