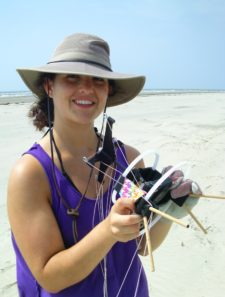 This summer, an afternoon spent flying kites at the beach will be just another day at work for some researchers at the University of North Carolina at Chapel Hill.

Now that classes are out of session, Elsemarie deVries and Evan Goldstein don their sandals and sunscreen haul kites and cameras to the Outer Banks in the name of science. They are coastal geologists who study how beach grass and sand dunes affect each other.

These researchers are part of a “21st-century renaissance” of scientists who use kites to collect geographic information. A camera cradled beneath a kite snaps a collection of what Goldstein calls “higglety-pigglety images” from all over the beach. Once they get back to the lab, the team uses software to stitch these pictures together into a 3D map. With enough data, they hope to understand how dunes grow.

To attach real dimensions to their maps, the researchers roam around on the beach with a GPS unit, noting the coordinates of specific locations. In a pinch, anything can be a ground control point – on one memorable day, dog-poo bags marked the GPS locations (although deVries is quick to point out that the baggies contained only sand – not feces).

Although many people find the beach a relaxing place, Goldstein says that some of these trips to the coast have actually been “pretty stressful.” Particularly windy weather can sour a field excursion since strong wind can send the kite into a nosedive. To solve this problem, Goldstein dove headfirst into the physics of kite flying literature (yes, that exists), and the team picked up a more stable kite with a keel.

Now that they know how to capture these bird’s eye images and turn them into topographic maps, Goldstein is setting his sights on “capturing time series – going back to the same site repeatedly over and over again.” They hope that building a series of 3D maps will show them how plants and dunes change together.

Taking pictures with kites instead of, say, drones, which are increasingly used for aerial photography, may seem delightfully quirky and old-fashioned, but cost and legality make kites an appealing option. Even though the kind of kites able to support a camera cost a little more than tuppence for paper and string, they can still be less pricy than drones. Goldstein also points to “the regulatory advantage” as a key reason that kites will be keeping this research aloft in the upcoming months.

Author’s note: Although I am not involved in the kite mapping project, I am a MS student in the same lab as Dr. Evan Goldstein and PhD candidate Elsemarie deVries, under the direction of principal investigator Dr. Laura Moore. Dr. Kenneth Ells of UNC-Wilmington is an additional collaborator on this project.