You may think it’s pretty neat that your dog Fido knows how to shake or bark on command, but until he learns to tell you where the good restaurants are, he’s got nothing on the African honeyguide. These sm 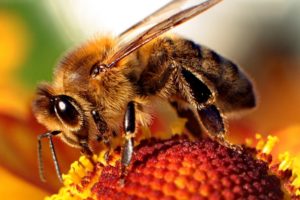 all birds are experts at locating beehives, and they cooperate with humans to get to the treats inside. After locating a hive, a honeyguide will approach a nearby human and give a loud, chattering call to gain his attention. Hopping from branch to branch, the little bird then leads the way to the hive. It lets the person it’s brought subdue the bees and remove the honey, and once the coast is clear, the honeyguide swoops in to feast on the wax that is left behind.

People looking for hives will also call for the birds to help them.  Different calls are used in different regions, but honey hunters in the region of Yao in Mozambique use a special “brrrr-hm” sound which has been used for generations. A recent study, published in Science, tested the possibility that honeyguides are able to distinguish the “brrrr-hm” call from other human sounds.  To find out, researchers played honeyguides a variety of sounds from animal calls to human words, and tested which sounds the birds responded to most strongly. Ultimately, they found that using the “brrrr-hm” call more than tripled the likelihood of being successfully led to a hive as compared to the other sounds.  This suggests that the birds are able to recognize the call as an invitation to cooperate, making it one of the few cases of communication between humans and wild animals.

Whether the birds learn to lead humans to honey or if it is an innate behavior is unknown, but it is likely a combination of both. Honeyguides are brood parasites, which means that they lay their eggs in the nests of other species.  This makes it much harder for young to learn honeyguide-specific behaviors, and suggests that there is some innate component to the cooperation.  On the other hand, although young honeyguides will chatter at humans once they have found a hive, they do not respond to the “brrrr-hm” call like the adults do.  This indicates that there may be some learning involved in the process as well. Whatever the cause of cooperation between these little birds and their human helpers, it’s a sweet deal for everyone involved.


Follow us on social media and never miss an article: