No, sorry, it’s not the latest variety of Corona beer. Rather, it is a new exciting advance in understanding nanoparticle toxicity!

Nanoparticles are any really really small particles in the nanometer range (1-100 nanometers). For size comparison, the thickness of normal hair is 80,000 nanometers. Because they have different chemical and physical properties compared to larger particles, nanoparticles are already being used in numerous capacities. They are used to produce lightweight but strong materials for use in airplanes, in clothes to kill bacteria, in food packaging to promote shelf life, and in sunblock to improve UV protection. Much research is ongoing to include nanomaterials in medicine, such as to treat cancer and to improve medical imaging.

Though nanoparticles are becoming widely used in consumer products and there is increasing development of nanomedicine, our understanding of how nanoparticle exposure affects human health is struggling to keep up. Thus far, researchers thought that nanoparticle toxicity was dependent primarily on physical or chemical properties, like composition (silver vs. iron) or size. However, recent findings indicate that it might not be that simple.

When nanoparticles come into contact with biological materials (for instance, the blood), proteins and other molecules are naturally attracted to its surface and begin to form layers around the nanoparticle. This biological coating is known as a biocorona. Thus, when the body is exposed to nanoparticles, it is likely encountering nanoparticles with a specific biocorona that has formed on it, not just the nanoparticle itself. Different biocoronas on the same type of nanoparticle can affect not only the particle’s chemical properties but also how it’s distributed throughout the body, how it’s eliminated from the body, and how the body reacts to it.

Dr. Jonathan Shannahan at Purdue University is one of many researchers trying to better understand how nanoparticles interact with the human body and the role of the biocorona in modifying toxicity.

Recently, Dr. Shannahan’s team published a paper on how cardiovascular disease states can affect iron nanoparticle biocoronas and toxicity. Iron nanoparticles are being developed for use in medical imaging and cancer drug delivery, so it is important to better understand their potential toxic side effects in humans. Many of the current iron nanoparticle toxicity studies have been designed to represent how a healthy individual would react. However, 1 in 4 people in America die from cardiovascular disease each year and 31% of Americans have high levels of cholesterol in their blood, a high risk factor for cardiovascular disease. The toxicity studies we have now do not capture the effects of nanoparticles in a significant portion of the population, people with or at high risk of developing heart disease. These people may also use iron nanoparticle therapies and diagnostic tools so it is essential to study how people with these underlying disease states would react.

To simulate normal and heart disease conditions in their experiment, Shannahan’s team incubated iron nanoparticles with blood serum from normal rats and rats with high blood levels of cholesterols (think LDL) and lipids, termed hyperlipidemic serum. They found that the nanoparticle biocorona changed when incubated in hyperlipidemic serum and that nanoparticles with a hyperlipidemic biocorona stimulated more of an immune response in cells that line the arteries! An increased immune response facilitates the formation of plaques in the arteries, which eventually could cause blockage of blood flow to the heart, leading to heart attacks.

Shannahan’s findings suggest that individuals with high blood cholesterol and/or heart disease may be more susceptible to the toxic effects of iron nanoparticles, i.e. they could have a worse reaction to iron nanoparticles than healthy individuals, and that this toxicity is driven by a change in the nanoparticle’s biocorona. 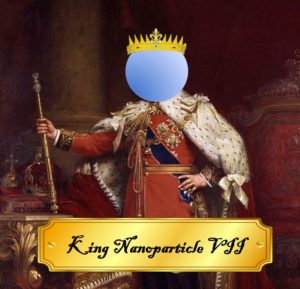 The discovery of this biological “crown” on nanoparticles and its ability to affect toxicity adds another piece to the complex puzzle of how to evaluate nanoparticle toxicity in humans. Such studies will only become more important as nanoparticles become more widely used in consumer products and, potentially, in modern medicine. Genetics, epigenetics, nutrition, environmental exposures, and now biocoronas will all play into the important quest to understand the toxicity of nanoparticles among the general population as well as for each individual.