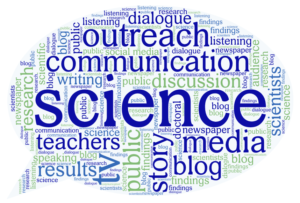 In the past few decades, there’s been a movement encouraging open communication between scientists and the general public. Starting in the mid-1990s, National Science Foundation (NSF) grant applications included a mandatory Broader Impact Criterion. This required scientists to detail how their proposed research will impact the broader society via teaching, training, discussing research findings with the public, benefiting society directly, and/or including groups that are underrepresented in STEM (science, technology, engineering, and mathematics) fields such as women, minorities, and people with disabilities. The Broader Impacts Criterion is also required for graduate fellowship applications within the NSF. The importance of scientists engaging with the public is echoed in the following statement by Alan, Leshner, CEO Emeritus of the American Association for the Advancement of Science (AAAS):

“If science is going to fully serve its societal mission in the future, we need to both encourage and equip the next generation of scientists to effectively engage with the broader society in which we work and live.”   -Alan Leshner, CEO Emeritus of AAAS

Despite national agencies mandating research with public engagement and many scientists considering it their responsibility to engage the media and taxpayers, a stigma exists in academia regarding scientists who actively engage in outreach efforts. The Sagan Effect is a stigma attached to spending too much time translating one’s research to the broader public. This phenomenon is named after Carl Sagan, an American astronomer and well-known popularizer, whose National Academy of Sciences nomination was rejected and tenure application denied by Harvard University. Yet, later analyses of Sagan’s publications suggest that his academic career was comparable to Academy members and colleagues who were less involved in public outreach.

According to the Sagan Effect, scientists’ research productivity (quantity and quality) is perceived as inversely proportional to the amount of time spent on outreach efforts or popularity. In particular, scientists who spend a considerable amount of time and effort communicating science to the public are often viewed as less successful than their colleagues and their science is considered less rigorous. Some of their colleagues worry that these public scientists, or popularizers, are more focused on media presence than discovery.  However, the surprise finding of this study was that scientists who engaged in public outreach are actually more active academically than the average scientist. So, truth be told, dissemination was not done by lesser academics. On the contrary, wider dissemination activities were correlated with higher performance.

Several studies are investigating these perceptions, demographics of public scientists, and barriers preventing more scientists from engaging. Women and scientists early in their careers are more likely to actively participate in science communication and outreach efforts. The most commonly cited barriers to outreach participation are time and lack of institutional support. Because research university systems value research productivity via grants and publications, scientists spend little time participating in efforts that are not directly related to their academic career goals. They perceive little to no reward from academia for actively engaging with the public, especially during the tenure process. Others say a lack of infrastructure makes finding and participating in outreach efforts a time- and labor-intensive process.

Sadly, 5% of scientists in this study do not participate in outreach because “they do not see it as part of their role as a scientist; these scientists believe that it is not their job to interpret their work for a broader audience.” Because it is not their responsibility, several scientists propose having non-scientists organize outreach efforts. From their perspective, scientists should focus on what they do best and share their work with intermediate people, who are very good at communicating science to the public. Alternatively, other scientists propose that a prominent figurehead who is well respected by the scientific community and the public, like a Nobel laureate, should lead national outreach efforts. For example, Neil deGrasse Tyson and William Sandford Nye, better known as “Bill Nye the Science Guy,” are prominent scientists and advocators often seen in media and recognized by the public. Tyson, in fact, was influenced by Carl Sagan, inspiring him to pursue both academic success and science communication.

Despite effective communication among scientists via peer-reviewed publications, some scientists indicate that poor interpersonal communication skills prompt them to avoid outreach efforts. In fact, 29% of all respondents stated that scientists are poor interpersonal communicators regardless of their actual skills. Yet training scientists to become effective communicators to non-experts and the public is not often cited as a possible solution. Surprisingly, about 25% of respondents described the public itself as a massive barrier to effective science outreach. These views were based on claims that the public is disinterested in science and does not trust scientists, discouraging outreach efforts because they are assumed to be ill-received. How do we bridge the gap between scientists and the public?

It’s time for a change — a positive embrace of science communication and outreach. Academic institutions should provide support for public engagement and facilitate opportunities for faculty to work with local schools, museums, and science centers. Perhaps science communication and outreach could be considered in the tenure process. Graduate and postdoctoral training should also include effective communication skills for both the scientific community and the general public. UNC is actively trying to address these concerns by providing seminars and workshop series on communication skills and outreach opportunities, in addition to professional development skills. Active participation by scientists at all stages of their careers will hopefully eliminate the Sagan Effect. Scientific discovery should not be kept in the scientific community — it should be shared freely with the public to keep them well-informed. Hopefully, the more the public interacts with diverse scientists, the more scientists will gain their trust and inspire a new generation of scientists and science communicators.