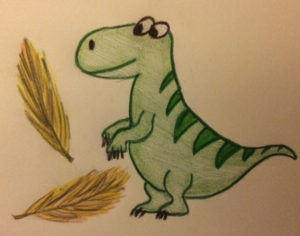 What happens when scientists get their hands on the remains of a dinosaur encased in ancient amber? Fortunately, life doesn’t imitate art to the extent to which we should be concerned about the potential pitfalls associated with an amusement park filled with revived, prehistoric beasts. And while you shouldn’t save any vacation time for a trip to Jurassic Park in the near future, paleontologists are excited to celebrate the findings of a well-preserved, feathered dinosaur tail published last month in Current Biology.

The mines of Myanmar are a longstanding source of the precious “gemstone” that is known as Burmese amber. While miners were searching for their own fossils (technically amber is fossilized tree resin) they came across a sample, smaller than a credit card and weighing about as much as one, that contained more than the usual bits of insects and foliage. This amber contained a portion of a tail, belonging to a juvenile dinosaur, which was covered in feathers. The fossil was obtained in 2015, directly from the miners, by paleontologist Lida Xing who hoped to learn more about the structure of the plumage. Evidence of feathered dinosaurs, which were distinct from the birds they coexisted with, was first discovered just before the turn of the 21st century. Despite their known existence, little has been discovered in terms of the evolution of the dinosaurs’ feathered coating. This finding, in particular, has given paleontologists a glimpse into the early differentiation between bird and dinosaur feathers.

Xing and his fellow researchers proposed that the specimen belonged to a group of two-legged dinosaurs known as coelurosaurs. The well-preserved sample was determined to be about 100 million years old, placing the species’ existence in the mid-Cretaceous period. Researchers were also able to conclude that the fragment belonged to a young dinosaur and that it was likely a portion of a much longer tail. Based on the structure of the preserved feathers, it was determined that the dinosaur was probably incapable of flight and that the feathers were more of an ornamental feature than a functional one. This sample is considered to be especially unique and precious as it is the first of its kind to contain feathers that are affixed to soft tissue, as well as bones, which are also intact. Once all of the possible data and information is divulged from the sample, Xing hopes to return the sample to its native Myanmar due to its value as a unique, fossilized specimen.

While the reanimation of dinosaurs for human amusement remains a tale of science fiction, the scientific community will certainly benefit greatly from the knowledge that can be obtained by studying these rare remains. Perhaps the ultimate goal for paleontologists will be to uncover an amber fragment that bears the remains of a complete dinosaur just waiting to reveal its secrets!