Why are people the world over captivated by the idea of vampires? We dive into scientific explanations that could have led to our fascination with these sometimes suave, always spooky creatures.

Vampires have been on my mind this spooky season thanks to my latest binge-watch, Mike Flanagan’s Midnight Mass. These bloodsuckers show up in the lore of almost every culture in some form or another. The Caribbean loogaroo is an old hag by day who sheds her skin at night and becomes a fireball, prowling the village for victims and sucking their blood. In parts of South Africa, the impundulu, or lightning bird, summons thunder and lightning and lusts for blood, sometimes shapeshifting to seduce its victims. The penenggalan is a beautiful woman who haunts Malaysian villages, detaching her head and neck to feed on the blood of pregnant women and children. And of course, there’s the European vampire we all know (and love?): an undead, corpse-like figure who sleeps in a coffin during the day and drinks the blood of its victims at night. Why are vampires so universal? As a biologist and a grade-A scaredy-cat, I demand a scientific explanation. So join me, reader, on a deep dive into the science behind the world’s vampire myths and why we’re so fascinated by them. 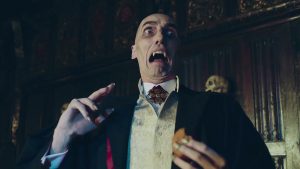 To figure out where the idea of vampires came from, we first need to think about the characteristics that define them. Although every culture and region has its specific myths, there are a few common threads that connect them. Most, but not all, vampire-like creatures are undead or immortal: human corpses that have been reanimated, but are still defined by their deathly looks. They all have a thirst for human blood and are generally not the friendliest of creatures, although whether or not they kill their victims varies by legend. They often only come out at night, and are heavily associated with witches, demons, and other creatures of the night. And finally, many vampire legends have some form of magical or superhuman powers, which they use to hunt their victims more easily.

It turns out that many of these characteristics are symptoms of diseases that were prevalent before medicine could explain them. In fact, a group of blood disorders called porphyrias are now considered the most likely explanation for vampire sightings. Acute porphyria happens when chemicals called porphyrins accumulate in parts of the body they’re not supposed to be in. Normally, porphyrins act as building blocks for heme, an essential molecule that gives your blood its red color. However, when a genetic mutation causes a person to lack the proteins that turn porphyrins into heme, the porphyrins can hang out in the liver and skin, where they can cause damage. Symptoms of porphyrias include pain and blistering of the skin when exposed to sunlight, receding gums which cause teeth to appear fang-like, and aversion to garlic, all of which sound like our bloodsucking buddies. Additionally, because porphyrias sometimes cause a person’s urine to turn red, the general public assumed that they were drinking blood, leading to stigma and fear surrounding the disease. Tuberculosis, which was prevalent and devastating in the 19th century when many modern vampire myths gained steam, also causes symptoms that were confused with the undead, such as pale complexion, coughing up blood, and aversion to sunlight. It’s likely that at least some of the hubbub around vampires stemmed from a poor understanding of relatively common diseases.

However, these explanations leave some questions unanswered. What about legends of corpses that have risen from their graves? Why is there a whole community of self-proclaimed vampires in New Orleans who insist they require human or animal blood for nourishment (seriously, read this one if it piques your interest)? And why does the idea of the vampire captivate us across cultures and time? It wouldn’t be spooky season without a few mysteries left creeping around in the dark. So be safe out there, and even though you’re now armed with scientific facts, maybe carry a clove of garlic too just to be safe.