The world lately feels more than ever like something out of a science fiction novel. Here we dive into CRISPR, a technology designed and used to edit genomes. 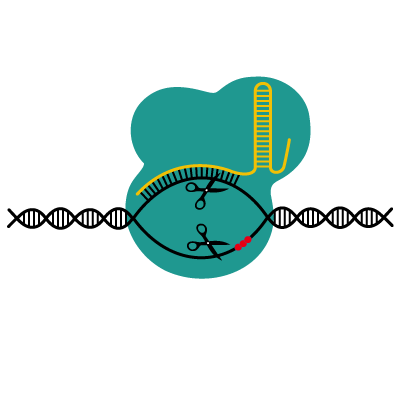 It’s 2009 and I’m 14, sitting in a dark biology classroom with half of my peers asleep around me. I’m wide awake, though, because the movie GATTACA is playing on the projector and I’m stunned. Days earlier, we had just learned the basics of DNA: how it acts as a blueprint for our cells, containing instructions in the form of little chemical letters, all bound together and squished up in the nucleus. Now, during the dimly lit movie action, we were learning that DNA could be manipulated by people – not just in the cases of cancer or other diseases – to change those instructions. GATTACA was my first introduction to this idea of genetic engineering, of changing DNA to give living organisms new properties.

There are several terms out there for this concept: genetic/genomic engineering, gene editing, genetic manipulation. They all encompass the same basic principle – changing the blueprint inside cells so that ultimately the organism containing the altered cells acts differently. Think Indominus Rex from Jurassic World, a brand new species of dinosaur scientists created by manipulating the DNA of multiple animals, or Wolverine from X-Men, whose already existing superpowers were improved using genetic engineering.

But those are all science fiction. How does this actually work in real life?

While there are several ways to manipulate the DNA inside a cell, possibly the easiest and most commonly known is CRISPR. CRISPR is short for Clustered Regularly Interspaced Short Palindromic Repeats, but don’t let the long name trip you up. All it really is is cellular machinery, originally identified in bacteria as a way to fight off invading pathogens, such as viruses. The machinery is made up of a protein called Cas9 and a genetic material that is similar to and made from DNA, termed RNA. Bacteria use this machinery to fight off viruses by capturing small pieces of the invading viral DNA and incorporating that DNA into the bacteria’s DNA. This essentially gives the bacteria a way to remember the virus or any closely related viruses. When another virus attacks the bacteria, the bacteria produce RNA from the incorporated DNA pieces that matches the new virus’ DNA. The bacteria then use the Cas9 protein and its RNA to target the virus. The RNA guides the Cas9 protein to the new virus’ DNA, then the Cas9 protein acts as a molecular scissor to cut apart the viral DNA, disabling it and protecting the bacterial cell.

Scientists were intrigued by this natural genetic engineering and identified and published in 2014 a way to harness the bacterial machinery described above to work in human cells. Researchers were able to recreate the CRISPR system outside of bacteria and subsequently insert the machinery into human cells in order to manipulate human DNA. This technological advancement has opened the door even further for genetic engineering.

The applications of CRISPR are endless. In the eight years since CRISPR was published as a tool for DNA manipulation, CRISPR has been widely used in research labs not only to investigate basic science but also as a potential cure or preventative treatment for many genetic diseases.

Soon after the discovery of CRISPR, scientists realized the potential CRISPR had for altering the genomes of human embryos. Controversy ensued and in late 2015, an international summit was held to discuss the ethical, medical, and governance issues surrounding the recent developments of CRISPR. By early 2017, the US National Academies of Science and Medicine gave a tentative go-ahead to explore the use of CRISPR for editing human embryos.

The world was shocked in late 2018 when Chinese scientist He Jiankui abruptly announced the birth of twin girls whose embryonic genomes he had supposedly edited. He claimed that he had successfully edited a gene called CCR5 and thus prevented the girls from infection by HIV, the virus that causes the chronic, potentially fatal condition AIDS. Although this sounds like a big success for science, He did not follow safety protocols, forged ethics-review documents, and purposefully manipulated blood samples of patients. It has still not been proven that He was successful in directly editing the twins’ genomes and the ethical standards behind CRISPR has become a hot topic of debate.

While the ethics of and the guidelines for editing embryos is still up for debate, researchers are making progress using CRISPR in adults. CRISPR has been used in adult humans to fight off cancers, blood disorders, neurological diseases, and more. For example, scientists have removed cells from sickle-cell anemia patients, edited the cells with CRISPR, and re-injected the cells back into the patients’ bodies. Early results suggest that symptoms of the disease were lessened, but further testing and long-term follow-up studies need to be done. Excitingly, researchers are also on the verge of injecting CRISPR machinery directly into the human body, rather than removing cells, editing them, and re-inserting the edited cells.

CRISPR has proven to be a versatile and successful tool for genetic manipulation throughout the past eight years. While there remains extensive controversy as well as safety questions surrounding the technique, it seems more likely than ever that the gene editing field is heading into an unprecedented era for clinical applications.