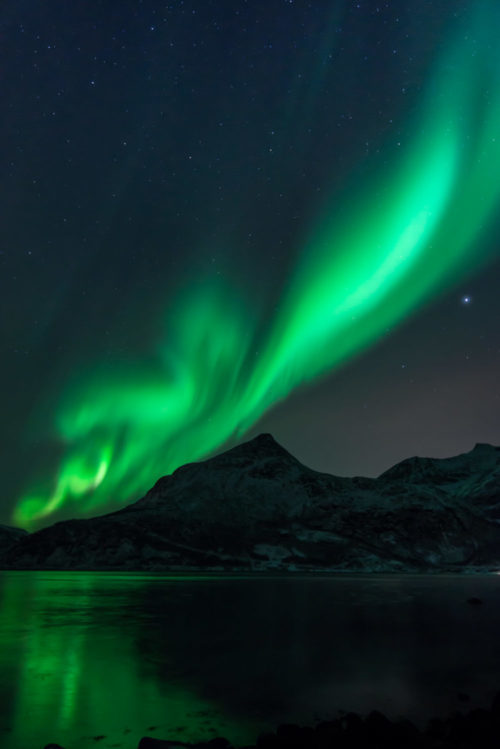 Growing up in northern Minnesota, aurora borealis or the “northern lights” were always a sight to see. The green lights dancing across the night sky filled me with a sense of wonder. What is out there beyond the clouds? It was not until I moved south that I realized just how spoiled I was to grow up in a place where the northern lights were a common accessory to the stars in the night sky. In fact, hundreds of thousands of people travel to the world’s most remote places each year just to catch a glimpse of this spectacular light show. For those who have yet to witness the wonder of the northern lights, a new destination can be added to your itinerary: Mars.

Auroras are greenish/yellow, or sometimes red, blue, or purple streaks of light that can be observed in the night sky. Aurora borealis or the northern lights refers to auroras observed in the northern hemisphere, while aurora australis also known as the southern lights refers to auroras seen in the southern hemisphere. Auroras are caused by charged particles from the sun that travel to Earth.  Most of these particles are deflected by the Earth’s magnetic field (Fig. 1). However, some will enter Earth’s atmosphere and interact with oxygen and nitrogen particles. When the charged particles collide with oxygen and nitrogen gas molecules in the atmosphere, energy is released in the form of light, resulting in auroras. The color of light released is dependent upon which molecules the charged particles interact with; oxygen results in a green or red color, while nitrogen causes a blue or purple color.

Auroras are most often seen at the Earth’s poles, but luckily, a trip to the north and south pole is not necessary to see this spectacular light show. Auroras can be seen from many places including Canada, the northern U.S., Scandanavia, Iceland, New Zealand, and Australia. Remote areas with little light pollution will give you the best views. The Space Weather Prediction Center in the National Oceanic and Atmosphere Administration even releases 3-day aurora forecasts to help you plan your aurora viewing excursion anywhere on the globe. However, if you are feeling very adventurous and a trip to the most remote regions of the Earth just will not do, you may consider a trip to another planet.

For the first stop on your interplanetary aurora hunt, I might suggest Mars, given its proximity to Earth and the recent observation by scientists that Mars has green auroras. Although auroras have also been observed on Jupiter, Saturn, and Neptune, these auroras were primarily ultraviolet or infrared in color. Ultraviolet and infrared auroras are caused by interactions with hydrogen atoms and are not visible to the naked eye. On a rare occasion scientists have observed red or blue auroras on these other planets and their moons. This makes the green auroras observed on Mars the first green auroras ever found on a planet other than Earth. Green auroras require the excitation of oxygen in the atmosphere. While the martian atmosphere does not contain free oxygen like that of Earth, the atmosphere of Mars does contain a large amount of carbon dioxide. When exposed to sunlight, carbon dioxide releases an oxygen atom that then interacts with the charged particles from the sun, causing the green glow.  By studying when and where auroras are visible on Mars, scientists can monitor changes in the composition and thickness of Mars’ atmosphere, which will be essential information for any future manned missions to Mars. Furthermore, studying auroras on other planets can help scientists understand how charged particles interact with magnetic fields, which could aid in our understanding of how to harness nuclear fusion for energy production.

Realistically a trip to Mars to see the beautiful green auroras is still a distant dream, but luckily Earth’s strong magnetic field and complex atmosphere provide some of the most colorful and breathtaking auroras on this side of the Milky Way. So, the next time you travel to the northernmost or southernmost parts of the world, make sure to look at the night sky. If you’re lucky, you might just get a front seat to a light show that is truly out of this world.

One Reply to “Auroras: A Light Show Out of this World”