It is 2019, and essentially everyone knows someone suffering from cancer. Conventional cancer treatments are not always effective, are not specifically targeted to the cancer cells and can, therefore, have adverse side effects, for instance hair loss, nausea, and intense gastrointestinal issues. Due to these side effects alone, it is entirely understandable why a cancer patient would not want to continue to receive treatment. Therefore, the development of cancer-specific therapeutics that increase the stimulated immune response is of great importance.

Treatment of cancer can be thought of as driving a car. For instance, you would want to put your foot on the gas pedal to turn ON your body’s protective immune system for example your body’s T cells so that they can attack anything harmful to the body, including cancer. Researcher James Allison realized that it takes more than just “stepping on the gas” when trying to turn the immune system against cancer. You also need to “release the brake”—in this case, a molecule called CTLA-4 that stops T cells from attacking to counteract the immune system’s hesitancy to attack tumors. Targeting these stop/brake signals is called immune checkpoint blockade/therapy. In 2018, Allison was awarded a Nobel prize in medicine for his work on discovering the immune system’s role in defeating cancer by using such immune checkpoint inhibitors. Allison designed a drug called ipilimumab (Yervoy®), to treat one of the hardest-to-treat cancers at the time, metastatic melanoma. The drug became the first to be proven in a randomized Phase III trial to help patients with this deadly cancer to live several months longer than any other treatment offered.

These “breakthrough” advances in medicine were not found overnight; they were discovered by years of trial and error by many scientists. In fact, some of the best advances in medicine were found entirely by accident. One famous example is how Alexander Fleming identified penicillin as an effective antibiotic; by noticing that the bacteria he was studying in the lab had fungal contamination that killed the bacteria on his agar plates. Biology is complex and there appears to be a balance to keeping nature such as bacteria, fungi or even cancer in check. Another example of a beneficial balance, yet accidental discovery was in the late 1800s, when it was found that cancer patients experienced periods of cancer regression after viral infection. Unfortunately, the benefits of having delayed or stopped cancer proliferation with the flu virus were only temporary as these patients eventually died by not being able to fight off the virus. From then, the study of cancer-killing viruses was born. 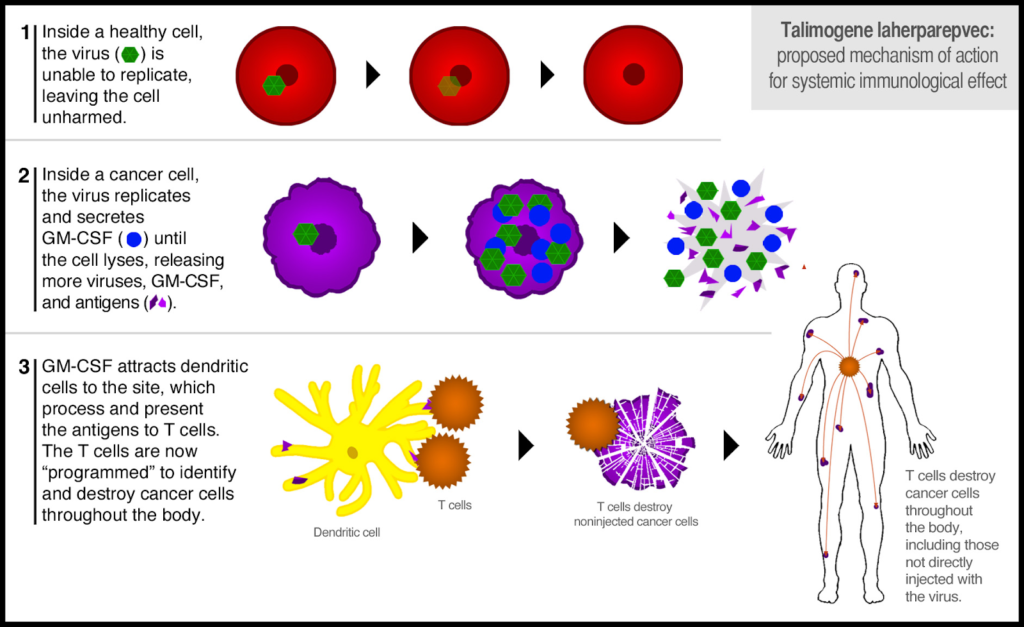 Oncolytic virotherapy is a non-traditional treatment option that uses viruses made to specifically target and destroy cancer cells. These viruses can also be designed to deliver immune modulators or tumor-associated markers to the tumor micro-environment. However, oncolytic viruses are often insufficient to completely exterminate the outgrowth of tumors, as the virus is unable to effectively bind and infect dormant tumor cells. Therefore, some additional stimulation may be required to further stimulate the host’s immune system to prevent the outgrowth of un-infected tumor cells.

Scientists Grant McFadden and Eric Bartee have shown that Myxoma virus (MYXV) is beneficial for treating mice with metastatic melanoma when the virus delivers an antibody, anti-PD-1, that turns off a T cells’ “STOP” signal. Physician-scientists at the University of North Carolina Chapel Hill, such as Frances Collichio, conducted randomized Phase III clinical trials in melanoma patients using an oncolytic herpesvirus designed to deliver GM-CSF, a protein that stimulates the production of immune cells in the body. In October 2015, the Food and Drug Administration (FDA) approved this oncolytic herpesvirus; talimogene laherparepvec (T-VEC, or Imlygic®) for the treatment of some patients with metastatic melanoma that cannot be surgically removed. Although over a dozen oncolytic viruses are being investigated, T-VEC is the first-ever oncolytic virus therapy to receive FDA approval.

With all of this in the scientist’s tool belt of knowledge, who knows, perhaps the future of cancers other than metastatic melanoma will consist of oncolytic virotherapy.