My article is about the chemical reactions involved with baking cookies. I walk through the major processes to explain the chemistry of cookies.

With the holidays around the corner, avid bakers are in full swing. Delicious treats seem to appear out of thin air and are followed by the delightful smell of freshly baked goods. But have you ever wondered exactly how these enticing treats arise from seemingly ordinary ingredients? What causes these treats to turn perfectly golden brown after 10 minutes in the oven? And why is it that cookies have such a mouthwatering aroma? Well, a little bit of chemistry can unravel the science behind holiday baking! 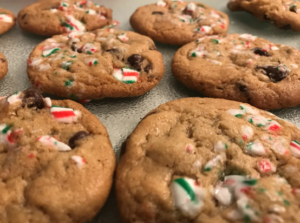 The most basic recipe for preparing chocolate chip cookies is fairly straightforward. You start by preheating the oven to 375oF, mixing the wet and dry ingredients separately, and then combining everything together. Once the dough is divided onto the baking pan and placed in the oven, a series of chemical reactions occur. First, the butter begins to melt around 92oF and causes the dough to expand. When the cookie dough reaches 144oF, proteins from eggs start to unfold, or denature, into amino acid residues. With even more heat, the proteins will coagulate and become solid-like, which provides additional structure and limits the spreading of the dough. At 212oF, water in the dough boils and evaporates that gives the cookies a fluffy and light texture. Also, as the leavening agent, sodium bicarbonate (NaHCO3, aka baking soda), reacts with acids in the dough, CO2 is generated as a byproduct and results in cookies with airy pockets. 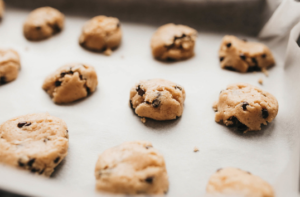 Once the dough is at 310oF, the Maillard reaction takes place. This reaction was identified by the French chemist, Louis-Camille Mallard, in 1912. During this process, sugars and amino acids (from proteins in the dough) react and undergo rearrangement to produce ketosamines, which then transform into organic polymers (complex molecules composed of repeating subunits). These final products are responsible for the golden-brown appearance of the cookies and some of the delicious flavors and aromas released after baking. 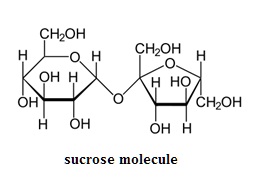 At 356oF, caramelization occurs and is the final and most important reaction for making delectable cookies. At such high temperatures, sugar (aka sucrose) in the dough breaks down and is oxidized into glucose and fructose fragments. These compounds react further and polymerize to form new organic complexes that give off the irresistible smell associated with freshly baked cookies. While both the Maillard reaction and caramelization lead to somewhat similar results, caramelization only happens in foods with large amounts of sugars present and contributes additional flavors that can be best described as buttery, sweet, and nutty.

After the dough has gone through all necessary reactions, the final product now contains chemical potential energy in the newly formed bonds. When consumed, the energy in the cookie is converted into kinetic and thermal energy during cellular respiration. In addition, the texture, size, and flavor of a batch of cookies can be controlled by changing variables, such as butter temperature, leavening agent, and type of sugar. As you find yourself baking or enjoying some holiday treats, remember to appreciate the chemistry and science involved!