Age restrictions on the purchase of recreational drugs are continuing to strengthen. What’s the science behind this age limits, and are these measures really necessary? 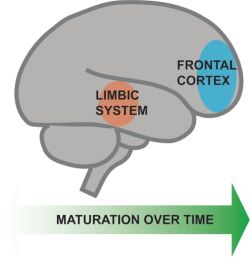 Do you remember your first drink? If you’re anything like the average social drinker, you probably tried alcohol for the first time in high school or college. It makes sense that most people begin experimenting with alcohol and other drugs during this time period; teenagers often have less parental oversight, more free time and money, and a desire to feel like an adult. However, it’s not just social factors that make drugs so popular among high schoolers and college students. The biology of the developing brain also sets the stage for drugs of abuse, including legal drugs like alcohol and nicotine, to become more attractive to older children and young adults. If you partied hard in college, your brain might be partly to blame!

The beginning paragraph used a lot of different terms to describe the same general age group: high schoolers/college students, teenagers, older children, young adults. All of these descriptions refer to the period of transition between childhood and adulthood, which is broadly defined as “adolescence”. Adolescence is a unique developmental period, as distinct from childhood and adulthood as those two developmental periods are from each other. That video you had to watch in health class about how your “body is going through many changes” during adolescence wasn’t wrong (although it may have been borderline traumatizing). Puberty, sexual maturity, social development, and psychological transformations all take place during these important years, which in humans are usually the early teens (12-13) through the mid-twenties. Adolescence is characterized partially based on behaviors that typically begin or become more intense during this developmental stage, including impulsivity, socializing, novelty seeking, and sensitivity to rewards. Adolescence is evolutionarily conserved in mammals, meaning that non-human primates, pets like dogs and cats, and common lab animals like rats and mice all go through an adolescent period as they mature. This allows the use of simple animal models of adolescence to ask important questions about the neurobiology of brain development. Rodent models also provide an important clue towards the biological basis of adolescent drug vulnerability; even though rats don’t go to college or have more money to spend on drugs during adolescence, they are still more attracted to drugs of abuse like alcohol during this time.

The development of the adolescent brain

In humans as well as other mammals, brain development during adolescence is very dramatic. Two of the most important features of adolescent brain development, particularly with respect to drug use, are structural maturation and synaptic plasticity. Structural maturation is the process that brings brain regions into their adult configuration by changing the number of neurons in a region, where those neurons send messages, and how efficiently that information travels. Myelin, a fatty substance that coats the processes of many neurons, acts as an insulator to speed the rate of communication between cells. Adolescent brain development in animals and humans is characterized by increases in myelination (white matter) and decreases in unmyelinated tissue (gray matter), and these changes in white vs. gray matter distribution can be used as a hallmark of how mature a given brain area is at any point during adolescent development.

Importantly, structural maturation doesn’t happen in all brain regions simultaneously. Instead, development proceeds from the most posterior brain regions, through midbrain regions and ends with the frontal cortex as one of the last regions to mature. This means that midbrain regions associated with reward and emotional behavior (such as the nucleus accumbens, amygdala and ventral tegmental area) reach their adult structural state earlier than the frontal cortex, which is involved in behavioral inhibition and decision making. This may in part explain some of those adolescent-typical behaviors; the “breaks” of the reward system (the frontal cortex) aren’t mature enough to reign in the motivation circuitry.

Structural maturation is the big-picture process that drives adolescent brain development, but on a smaller scale many of these changes are produced through synaptic plasticity. Plasticity is how the brain learns and adapts to change, by strengthening the connections between neurons that fire together and weakening the connections between neurons that don’t often communicate directly. During adolescence, neurons appear to be more sensitive to the mechanics of synaptic plasticity, and exhibit increases in both synaptic strengthening and synaptic weakening. This state of heightened plasticity makes the adolescent brain particularly vulnerable to environmental influences, and synaptic plasticity gone awry has been suggested by some researchers to explain why so many psychiatric illnesses first emerge during adolescence.

The adolescent brain and drugs

When it comes to drug exposure, adolescents are at a double disadvantage compared to adults. First, the immaturity of the cortex relative to the reward circuitry makes drug rewards extra appealing to adolescents. Second, the increased synaptic plasticity of the adolescent brain makes it more vulnerable to enduring changes induced by drug exposure. A common feature of many drugs of abuse, including nicotine and alcohol, is their ability to engage synaptic plasticity and strengthen brain circuitry involved with drug reward. Over time, plasticity in these important reward circuits contributes to drug seeking and consumption. Chronic drug use can also weaken the connections between the frontal cortex and reward-related regions, leading to a loss of control over behavior and compulsive drug use. Adolescents, who begin with greater plasticity and weaker frontal input into reward centers, are more vulnerable to these drug effects.

The outcomes of this vulnerability can be serious for teenagers who use alcohol, nicotine and other drugs of abuse. The age at first use of a drug is a strong predictor of the risk of developing a drug use disorder over the lifespan. For example, the younger a person is when they have their first drink, the higher their chances of developing alcohol use disorder later in life. The same pattern is evident for age at first use of nicotine products and lifetime risk of daily smoking. Adolescents also have reduced sensitivity to some of the intoxicating effects of drugs. It often surprises parents to learn that it can take much more alcohol for a child to begin slurring their words or feeling drunk than it would for the parents themselves to feel the effects of alcohol. This developmental tolerance prevents adolescents from accurately gauging how intoxicated they are and can lead to dangerously high alcohol consumption or binge drinking. The effects of alcohol on learning and decision making, on the other hand, are more pronounced in adolescents than adults, which may be why the risk for drunk driving and other dangerous behaviors is higher for adolescents than adults.

The drinking age in the United States has been set at 21 since 1984, and in late December 2019 the minimum legal age to purchase tobacco products was increased from 18 to 21. This can seem paradoxical considering all the things that 18-year-olds are legally allowed do: vote, run for office, serve in the military, sign contracts, live independently, make their own medical decisions and control their own finances. An age limit so at odds with the responsibility that comes with being 18 can seem like an unjust restriction on the rights of young adults. The concern with drug use is not how responsible the user is, but how much risk is inherent in drug use at younger ages. The 21-year nicotine limit was projected to prevent 223,000 premature deaths in people born between 2000 and 2009 in a recent Institute of Medicine report that impacted the FDA’s decision to raise the minimum legal age. Science cannot dictate public policy, it can only inform it, and as the legalization of marijuana becomes more widespread, society will need to continue to evaluate age limits on drugs of abuse. An understanding of adolescent neurobiology and the unique risks of adolescent drug use should be part of this conversation.