Americans throw away 80 billion pounds of food each year and the food waste makes up more than 22% of space in landfills. That’s equivalent to 219 pounds per person and corresponds to approximately 30-40% of the total food supply in the United States. Unlike most trash though, food scraps can easily be utilized in a much more productive manner. Instead, the discarded food can be recycled through composting. When considering composting, it is important to recognize the  three major components involved in a successful compost system: the carbon-to-nitrogen ratio (C/N), the oxygen content, and the pH level.

Two chemical elements that are essential for composting are carbon and nitrogen. During the composting process, microorganisms, such as bacteria and fungi, use organic material (i.e. carbon containing compounds) as an energy source and as a basic building block for the production of cells. In order to further sustain these microorganisms, there also needs to be a sufficient supply of nitrogen, which is essential for the production of proteins, nucleic acids, amino acids, and enzymes present in cells.

The ideal C/N ratio for composting is 30 parts carbon to 1 part nitrogen by weight (30:1). When there is an excess amount of nitrogen, ammonia gas is released as a byproduct and results in unpleasant odors. If there is too little nitrogen, then the growth of the microorganisms is stunted and this leads to slow rates of decomposition. Materials that are high in carbon are leaves, wood chips, and shredded paper, while those containing high levels of nitrogen are grass clippings and fruit and vegetable scraps.

By the end of a composting cycle, the C/N ratio slowly decreases to 10:1. This is due to the fact that as carbon is consumed by the microorganisms, two-thirds of the carbon content is released as carbon dioxide while the other third along with any nitrogen is used by the organism for building cells. 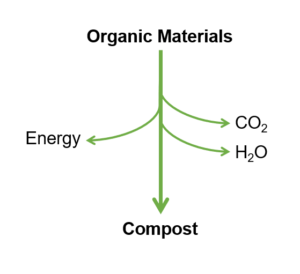 Additionally, the oxygen content present during composting is extremely important. Microorganisms break down carbon-containing compounds by  oxidizing organic molecules for energy. This results in the consumption of oxygen and the release of carbon dioxide as a byproduct. Compost systems require adequate air flow for this reason otherwise the process becomes anaerobic and leads to the production of unfavorable odors.

During the initial stages of composting, the pH becomes acidic (5.5) due to the rapid production of organic acids. The acidic environment is harsh and kills some types of pathogens in the process, however these conditions also promote other microorganisms to break down tough organic material, including newspaper and other paper products with high cellulose content. If the composting pile becomes too acidic, the activity of helpful bacteria and fungi is limited. Eventually, the pH may rise to  become neutral (7), but this level tends to drop to a pH of 6.5 to maintain slightly acidic conditions.