Why does sunshine improve your mood, especially after a long winter? We take a look at the science behind the happiness-boosting effects of longer, sunnier days.

The air smells like springtime. I close my eyes and tilt my face up to the irresistibly warm sun like a giant lizard. I suddenly realize that it stays light until 5:30 instead of 4:45 now. The first warm, sunny day of the year is a much-needed happiness boost after my dark winter months characterized by repeated nights of fuzzy blankets, Netflix, and resisting the urge to nod off to sleep immediately following work and dinner. Seasonal affective disorder (SAD) has a prevalence of around 5%, and many people who don’t meet its clinical criteria still note feeling sleepier, crankier, and unhappier during the winter months. On a smaller scale, many of u 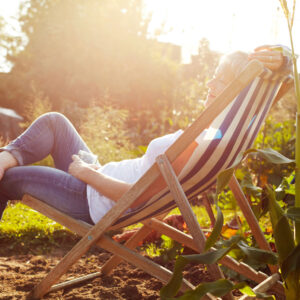 s who work predominantly indoors can attest to the mood-boosting power of stepping outside after a long day under fluorescent lights. But how does sunlight alone have such an effect on mood? As it turns out, it’s biological.

It’s relatively common knowledge that decreased sun exposure can lead to low vitamin D levels. This is because the UV rays in sunlight essentially help our skin cells turn into little vitamin D factories. A chemical called 7-dehydrocholesterol, which is naturally present in our cells, gets changed into vitamin D3 when exposed to UV radiation. So, when we don’t see a lot of sunshine in our day-to-day lives, our vitamin D levels will take a dip.  Previously, low vitamin D levels were thought of mostly as a physical health problem linked to low bone density and osteoporosis. However, more recent research shows that vitamin D might also play a major role in regulating serotonin, a major player in keeping our moods stable. Scientists have found the protein that turns vitamin D into its active form in cells in the brain, and another study showed that vitamin D can impact the activity of the protein that makes serotonin. These are all clues pointing to evidence vitamin D could affect brain chemistry in a way that changes our moods. However, as every good scientist knows, correlation does not prove causation. The question remains, can increasing someone’s vitamin D levels, either through diet or UV exposure, cause a lifted mood? The results of studies attempting to answer this question are mixed. Some show a positive impact of vitamin D supplementation on depression symptoms, while several large studies of dietary supplementation show no effect. Either way, it’s clear that more research is needed to determine whether vitamin D can actually make people happier.

There’s another way that shorter sunlight exposure during the winter months can affect mood. Our circadian rhythm, a 24-hour (plus or minus a few minutes) cycle of hormones, biological processes, and behavior that functions as our bodies’ internal clock, is heavily influenced by environmental factors. These factors include the amount of sunlight we get in a day. Dim light, like we get in the evening, causes an increase in blood levels of melatonin, a hormone that promotes sleepiness. On the other hand, bright morning light serves as a cue for the body clock that it’s time to wake up and be active. If sunlight goes away earlier in the evening and arrives later in the morning, like in the short midwinter days, a mismatch between environmental cues and circadian rhythm can affect all kinds of body processes, especially sleep. A disrupted sleep schedule can increase cortisol, a hormone linked to stress, and interfere with activity in the parts of the brain that regulate emotions and anxiety. In other words, messed up sleep can lead to a sour mood.

The good news is, dear reader, that whether you suffer from SAD every winter or just notice a general increase in grouchiness around January and February, there are things that can help. Getting outside more is an obvious one; even a few extra minutes in the sun can make a big difference. If natural sunlight just isn’t doing it, bright light therapy might: studies have shown that exposure to UV light, especially in the morning when your body clock needs that extra hint, is an effective treatment for SAD and other mood and sleep disorders. So whether you go out and buy a UV lamp or budget for an extra 15 minutes of walking outside every day, know that the effect of sunshine on mood is a real, biological one. And when that first warm, sunny spring day rolls around, take the time to enjoy it! It might be just what the doctor ordered.