This article is an attempt to summarize strategies being employed to reduce plastic waste and some fundamental chemical difficulties with these processes. It is my hope to inform on the progress of recyclable and biodegradable plastics.

The cost of plastic litter:

If you were looking for a nice quiet beach where you can bury your ankles in a world’s worth of plastic, Henderson Island, an uninhabited island more than 2000 miles away from the nearest human settlement, is the place for you. Here, the beaches are layered several inches thick with plastic washed up from marine pollution. If this vacation destination didn’t sound good enough, the coast is so crowded and contaminated by plastics that sea turtles don’t visit and beachfront invertebrates such as crabs and starfish are dismally in decline. From stainless steel straws to cloth totes for groceries, the social efforts towards reduction of plastic waste are ever increasing. These efforts have been motivated by public awareness of plastic pollution that can be found in the stomachs of marine life and on remote islands across the world.

Yet, society cannot replace all plastic goods in the light of environmentalism. Plastics exhibit an array of ideal qualities such as chemical resistance, light weight, and diverse architectures that are useful in a wide range of both industrial and personal uses. However, loss of plastics into the ocean is two-fold. There is a loss based on the inability to recycle or convert these plastics into other products such as moving palettes and furniture that has been made from high density polyethylene (HDPE), the same type of plastic as milk cartons. Secondly, there is a direct negative impact on marine life. In total, these costs exceed 40 billion USD from a purely economic perspective, and the adverse impact on marine life may represent irreparable loss of species and aquatic health. The horizon is perhaps in sight for a cleaner ocean, but great efforts must still be made. Here, we will investigate recent efforts into solving plastic waste. One reasonable strategy would be to either close the loop on plastic use through efficient recycling and reuse. Another strategy would be to produce plastics that decompose into harmless molecules in marine and soil environments while retaining practical lifetimes and stability, so transition to these degradable polymers does not compromise the continued use of petroleum-based plastics. 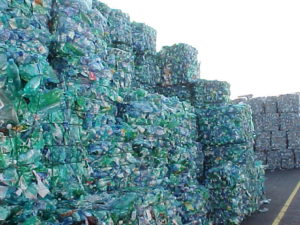 As an introduction, there are four broad tiers of recycling. Primary recycling refers to the reuse of the plastic for the same purpose either through melting and remixing or direct reuse. Secondary recycling, sometimes called downgrading, refers to the production of a less demanding application (such as making trash cans out of secondhand plastic jugs). Tertiary recycling refers to complete deconstruction of a plastic into the starting small molecule building blocks (or monomers) and effectively generating entirely new plastic. This strategy could evade some issues involved in the primary recycling of food grade plastics because the monomers would be purified to the same extent as in the initial production of plastic. Lastly, quaternary recycling refers to use of plastics to obtain energy, which is often performed through burning as a fuel. The use of compostable plastics represents a biological form of quaternary recycling, where the energy is used as a food source for different lifeforms. In both of these cases, however, carbon dioxide can be the major product depending on how the plastic is used by the lifeform. If plastics are compostable in unmanaged contexts, composting could also decrease total plastic waste without the need for great control of plastics in the hands of individuals. As a result, plastics that are compostable outside of industrial settings are of great interest, but many compostable plastics still require industrial composting, which requires constant heating to moderately high temperatures. Even in this context, they are sometimes not completely decomposed. Often, the plastic input into these recycling facilities demands over two months of high temperature composting; however, new plastics are coming in throughout this time that need to occupy the same space. To move through the monumental input of industrially compostable plastics, these composters shift to new batches every month.

Great strides in the design of molecules that may degrade polymers selectively and plastics that are more easily degraded into their starting materials have been made in recent years. In the first case, catalysts will allow selective and fast degradation while not being consumed by the plastic degradation. Catalysts are a molecule or element that might increase the rate of a reaction or the selectivity of a reaction by offering the starting materials a new route to their final state. An important aspect of catalysts is that they are not consumed while they are acting as tour guides for reactants to products, and so, they have the potential to be used over and over.  In this way, the use of catalysts has successfully converted a plastic composed of two different polymers into usable starting materials for virgin plastics. This approach is appealing for its ability to generate the precursors to completely new materials from mixed plastics; however, the process is still inefficient because it uses the same procedure to convert two different plastics. Effectively, because the groups of atoms surrounding the bonds targeted by this catalyst vary to a great degree between two different types of plastic, while a catalyst may have high efficiency for degrading one type of plastic, it may result in low yields with another plastic. Developing promiscuous catalysts (those that can interact with a variety of starting materials) would be of great interest for efficient recycling of more kinds of plastics, especially mixed plastics.

In addition to mediating the recycling of current plastics, a better approach may be to use plastics that are designed to be depolymerized in very specific conditions. In this way, an environmentally rare but laboratory-accessible condition may change a plastic bottle into its building blocks easily. One group at Colorado State University has designed plastics that at room temperature with a catalyst are driven towards formation of a hard plastic, whereas above the boiling point of water, the reaction is catalyzed to go backward to the building blocks. The catalyst employed is a purified lanthanide that would not be found in consumer products or the surface of Earth very often, meaning the accessibility of tertiary recycling, in this case, would not come at the cost of product usefulness.

Even though much effort has been made to generate biodegradable plastics, these plastics must be degradable in so many environments that labeling a plastic as biodegradable can be misleading. A study across open-air, soil, and ocean environments revealed that three different bags labeled to be some form of biodegradable, as well as the HDPE traditional plastic they were mimicking, were still nearly fully intact in the ocean setting after 3 years! Efforts into making plastics more biodegradable, or compostable, have shown some success. In one case, the incorporation of fine sawdust into an expensive biopolymer, poly(3-hydroxybutyrate-3-hydroxyvalerate), presented a strategy to increase mechanical strength and rates of degradation in compost while lowering costs of production. In unmanaged composting, this polymer composite was 78% decomposed within a 6-month time frame. The level of decomposition in this study was measured by  CO2 production by a soil sample containing the plastic compared to a control, and the total amount of CO2 that would be produced if all of the carbon in the plastic was converted to CO2.

A helping hand may come from nature though. Recently, bacteria capable of degrading polyethylene terephthalate, or PET, have been discovered. PET is currently the most commonly used plastic, and you may know it in the form of plastic bags at grocery stores and soda bottles. The enzymes involved in decomposition of plastics are of great interest to bioengineers. Gene insertion into E. Coli. for enzyme production is an industry with established infrastructure. If E. Coli. could make this enzyme, we would have a feasible way to mass produce a plastic-degrading product. These enzymes currently degrade at temperatures E. Coli. are generally cultured under, and so finely modifying these enzymes to maintain their ability to degrade this plastic at these culture temperatures (around human body temperature) is of interest. Mutation is a strategy which many molecular biologists, biochemists, and bioengineers employ for the modification of  proteins, including enzymes. Mutation involves changing a gene sequence by modifying a base in DNA, which then will change the protein structure. Recent advances, such as CRISPR, allow targeted gene modification that allows scientists to target very specific protein changes. Recent success in designing plastic degrading proteins has been reported by researchers at Kyungpook National University, South Korea who mutated three positions of the enzyme. Through these mutations (or protein modifications), they generated an enzyme that still degraded PET without breaking down in 10 days at 40 °C (104 °F), representing a very important benchmark for the study and use of this class of enzyme in a broader field than academic research.

With these diverse studies being undertaken to both resolve the plastic waste issues of the past and make recycling of new plastics easier, in a few decades we may be able to reduce our oceanic impact by leaps and bounds. It is especially encouraging to see policy makers from diverse nations working together to resolve these issues.  At the 2017 G20 Summit in Germany, the Marine Litter Action Plan to significantly reduce plastic waste in the ocean  was accepted by many of the foremost producers of marine litter, such as the U.S. As scientific and international interests align on this pressing issue, remediation of the problem is moving forward! However, it is still the duty of individuals to participate in the reduction of excess usage and responsible waste management. Legislation likely will prove a more effective strategy than social pressure though, as was seen in the Irish plastic bag levy which reduced use of plastic bags by over 1500% per capita. While social interest has greatly popularized recycling and environmental conscientiousness, even mild legislative action will serve to solidify these merits for the good of all. An even greater responsibility rests in voters to elect officials, from municipal to federal, with environmental interests to resolve these and other significant environmental issues that we will be facing in the coming years.