Have you ever wondered why antioxidants have become a staple ingredient in skincare and cosmetics? Read more to learn about how antioxidants protect your skin from premature aging, and how scientist are making these formulations better with nanotechnology.

Seekers of eternal youth are documented as far back as the 5th century B.C. when Herodotus famously described a mystical fountain that restored youth to those who drank and bathed in its waters. While the mysterious fountain of youth remains to be found, scientists are hard at work finding new ways to slow down the visible signs of time. Of particular interest is the development of skincare that fends off  “photoaging” or skin damage produced after prolonged sun exposure. Broad spectrum sunscreen is the first line of defense against harmful UV rays. However, according to the American Academy of Dermatology most people only apply between 25-50% of the amount of sunscreen recommended. Without proper application of sunscreen, some harmful UV rays penetrate the skin. This contributes to an increased amount of free radicals which damages skin cells and fibers. Overtime, the free radical damage becomes visually apparent and results in deep wrinkles, sagging, dark spots and even skin cancer (see picture).

How do we neutralize free radicals on the skin?

Lucky for us, our bodies already produce very effective molecules that neutralize free radicals in the body, these molecules are called antioxidants. Aging depletes the antioxidant defenses in the body, and as such the use of topical antioxidants is of particular interest. Nowadays, antioxidants are a staple ingredient in many skincare products, including sunscreen. The top natural antioxidants you will find in moisturizers and serums include vitamin C, retinol (vitamin A), α-tocopherol (vitamin E), resveratrol, polyphenols, and flavonoids often extracted from fruits and plants.

What’s the problem with antioxidant skincare then? 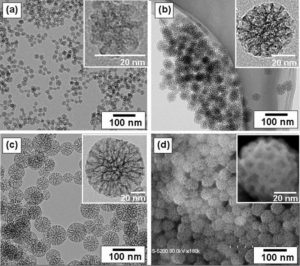 Well, while in theory these creams could minimize the effects of photoaging, the truth is that manufacturing antioxidant-containing skincare is a complex process. For starters, many commercialized antioxidants like vitamin C are very unstable and break down when exposed to body heat, air, and/or light. Additionally, a number of antioxidants fail to penetrate the skin, thus limiting the antioxidant options for topical use.

How do we fix that?

Nanoparticles have allowed scientists to create tiny mesh like balls, about 1,000,000 times smaller than the head of a pin, to protect antioxidants from rapid break down after skin contact. Recently, investigators from Università di Torino, in Italy, published an article in the International Journal of Pharmaceutics, detailing the synthesis of heat-responsive nanoparticles filled with a common plant flavonoid, quercetin, for skin topical application. Scientists found that quercetin-loaded nanoparticles were able to show a modest increase in antioxidant absorption by the skin. Even more exciting, the nanoparticle increased the free radical neutralizing effect of the antioxidant. Other studies employing a diversity of nanoparticles and antioxidants reveal similar results to those coming from Italy, all of which show that skin protection through topical nanoparticle containing antioxidants is achievable.

Though the mystical fountain of youth may never be found, scientists seem to be on the verge of uncovering the remedy to slow down the visible signs of aging through antioxidant nanoparticle-based creams.