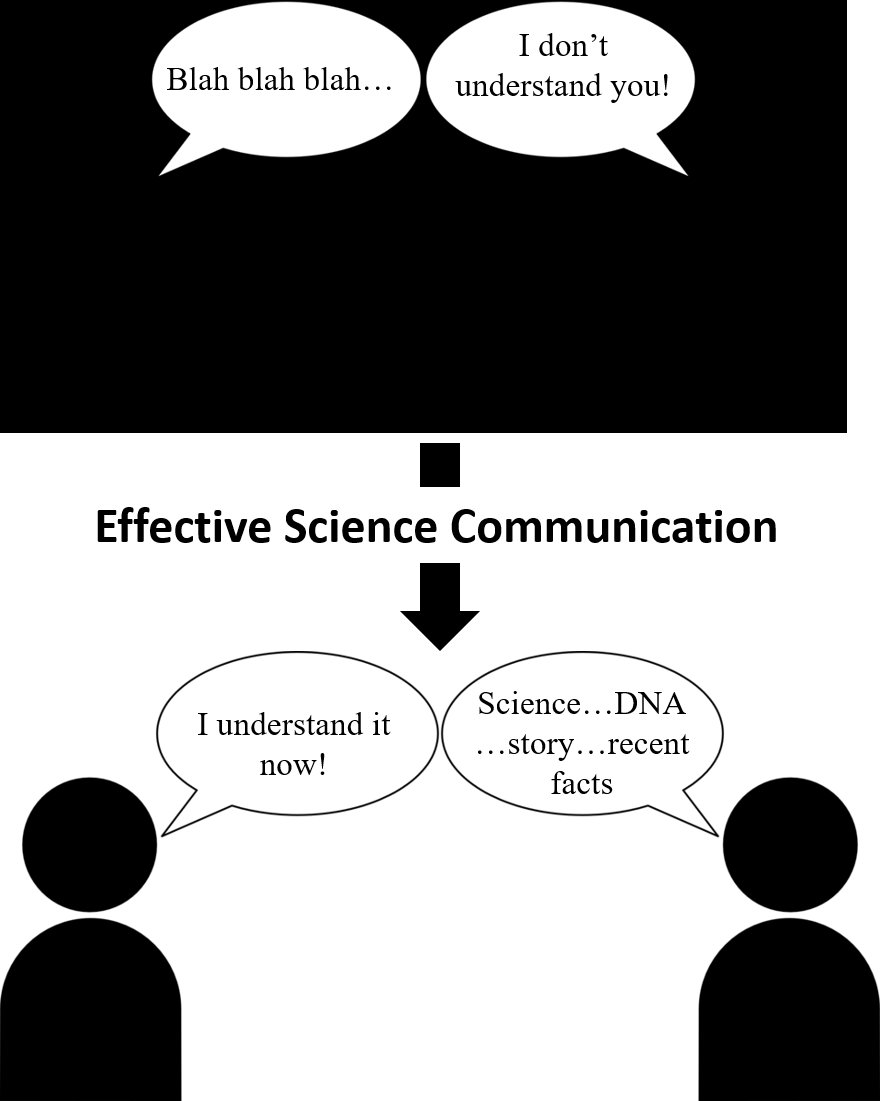 Insights from nonscientists: Things that scientists should know when communicating science

Be respectful and use simple language.

“In my view, many scientists have a difficult time remembering life before they spoke Science. Scientists who truly want to engage their lay audiences need to speak in everyday language. Be respectful of people’s intelligence but do not expect them to have knowledge of terminology and jargon exclusive to a laboratory or a field of science.” – Suzanne Dane, Research Institute Community Outreach

“A scientist who can break down the complexities of their science for the lay person makes that lay person into a conduit. This person can then relay this science to others, which spreads the scientific word and garners greater attention for the science. This can even lead to future funders for science.” – Brandi Childers, Research Institute Assistant Director of Programs

“Scientists can vastly improve their messages to nonscientists by explaining why they do their work rather than how. Tell us what compels you to do your work. What do you hope to uncover? Why is it important? Why do you want us to care? Those are the messages that will drive sincere interest in your work from nonscientists.” – Suzanne Dane, Community Outreach at the Nutrition Research Institute

“I wish that scientific findings were presented as a full story. Instead, findings are often presented as isolated discoveries, which can lead to confusion for nonscientists.” – Eric Helfrich, Information Technology

Provide a complete picture of the scientific field to avoid misinformation.

“In a world where news feeds are dominated with sensationalist, out of context, and overly dramatized headlines, it is easy for highly nuanced information to be lost during the modern media consumption. The expression of scientific discovery is often not revealed entirely to non-scientific readers. This shortcut is a huge disservice not only because it promotes misinformation, but also because it deprives the public of knowledge about the amazing world that we live in.” – Josh Swain, Account Representative

“Too often, scientific findings are presented as disjointed results instead of a full report. To achieve better understanding among nonscientists, it might be helpful for the media to wait to discuss certain scientific findings until there is a better consensus about the right answer instead of discussing a single research result in isolation.” – Eric Helfrich, Information Technology

“It is my opinion that the modern scientific community suffers from a marketing problem. There is a lack of understanding of how to draw public interest into highly detailed and specialized topics. Often people try to overcome this shortcoming by overly simplifying complex topics. This leads to the message falling short.” – Josh Swain, Account Representative

“Most scientists tend to be introverted and focused on research and are less likely to want to leave their lab to share their science. This leads to only certain scientists getting their science shared, when all scientists should be sharing their work. One answer is to start using Twitter and websites. Scientists can even just start with sharing other scientists’ posts and research. This is one of the best ways to connect with nonscientists about your research.” – Will Rose, Lutheran Pastor

“It is my belief that engineers and scientists alike become enamored with ‘their’ data and ‘their’ science and lose sight of the practical application and implementation of their discoveries.  At the front end of research and data collection, scientists should ask the question: ‘how will this discovery be useful and applicable in the future’. Then after years of work, scientists should ask: 1) How can society (any aspect of any given society) benefit from this discovery, 2) How can/should this discovery be implemented, and 3) Who will be the caretaker of implementing this finding.” – Joe Kotwis, Mechanical Engineer

“In the goal to make science accessible for nonscientists, much of the meaning and details of the science gets lost. The outcome is that the science is no longer applicable to our lives due to the context-specific conditions, and we ultimately label the science as not helpful. Nonscientists are capable of understanding a contextualized story where a finding is true in some cases and not in others.” – Eric Helfrich, Information Technology

Insights from scientists: Things that nonscientists should know about research and science

“Most people see science as a cold, rational subject; however, the process of science could be characterized as an art. The art of science is apparent in the flow of a scientific story which is created by the sum of meticulously crafted and answered questions. The larger the questions, the longer, more intricate, and nuanced the story. In the end, the greatest stories a scientist works on usually remain unfinished in their lifetime and instead will be pursued by the next generation. So goes the life cycle of a scientist.” – Evan Paules, Doctoral candidate in nutritional biochemistry

“I want nonscientists to know that science takes a long time and that we don’t get answers as quickly as we, or you, might want.” – Abrar Al-Shaer, Doctoral student in nutrition

“The scientific process comes with immense effort and a great amount of work; probably fivefold greater than most people would image. It is in this process that most scientists try to prove themselves incorrect and are highly skeptical of their work to ensure that their findings can be replicated and stand the test of time. Once one question has been crafted and answered, another comes in quick succession and the process repeats.”  – Evan Paules, Doctoral candidate in nutritional biochemistry

Science is about facts and about discovering those facts.

“Science does not have an agenda, and scientists are not politicians trying to convince you one way or another. We as scientists seek the truth, often battling our own personal demons of belief and opinion, and we aim to disseminate the facts as we find them. Additionally, the fact that scientists are willing to change their minds with new data is NOT an indication that our previous conclusions were wrong. Sure, sometimes we get it horribly wrong, and even make dangerous conclusions sometimes, but the vast majority of the time we are simply fine-tuning our previous findings.” – Grant Canipe, Doctoral candidate in psychology and neuroscience

“The field of science is always changing due to new studies and results. Also, for each piece of information we do know, there are ten times more facts that we don’t know yet that we have to keep studying to find out.” – Abrar Al-Shaer, Doctoral student in nutrition

Scientists care about people and animals.

“When public health researchers approach you in hospitals to find volunteers for our projects, our primary concern is your well-being. We’re nice people, so please take our surveys!” – Lisa Emerson, Masters student in public health and epidemiology

“Scientists use animals for research only when we have exhausted all other options for a particular experiment. We are not cruel people and we care for the animals as ethically as possible.” – Kristen Jeffries, PhD, Protein chemist

“Public health is a science, like any other, that uses data and lots of studies to inform public policy decisions and recommendations. Some of these decisions have increased life expectancy in the U.S. by 30 years since 1900.” – Lisa Emerson, Masters student in public health and epidemiology

“Most scientists are not stuffy, old white men. We are actually quite diverse, which is beneficial when many different perspectives are needed to complete a project.” – Kristen Jeffries, PhD, Protein chemist

Scientists are not the same as medical doctors, but we still know a lot!

“Between the time we spend in school to earn a PhD and then additional training as a postdoctoral researcher, scientists at the top of their fields are trained for the same amount of time (or longer) as medical doctors. However, the public often questions the ideas of expert scientists more than they question the advice of medical doctors.” – Kristen Jeffries, PhD, Protein chemist

“I wish nonscientists understood the difference between medical doctors and doctors of philosophy (PhD). Scientists with PhDs conduct research and know a lot about the area that they are currently researching. They don’t prescribe any medicines.” – Nipun Saini, PhD, Nutritional biochemist

Note 1: Although everyone is a scientist when they ask questions and find answers, I use the term “non-scientist” to refer to people for whom science is not their chosen profession.

Note 2: In the spirit of the scientific transparency, I disclose here my methods of obtaining the insights written in this article. I contacted scientists and nonscientists verbally, by email, or via Facebook and asked for their participation. This was not a random sample of people; these people were primarily people that I know, which means that this sample is biased. This is also a small sample and is not a complete overview of all the insights that people have about science communication. The insights and comments were emailed to me, texted to me, or were compiled from notes taken during a phone call or a face-to-face conversation.