Many of us have used the Global Positioning System (GPS) at some point in our lives. From commonly navigating to places, tagging people on social media, to even catching Pokemon during the Pokemon GO frenzy of 2016, the GPS has established itself as one of the most revolutionary technologies of the 21st century. However, many people don’t appreciate how it works, nor the woman who made the technology possible to begin with: Dr. Gladys West.

Let’s begin with how the GPS works. The GPS’s function stems from three main components: (1) a network of at least 24 satellites orbiting the Earth, (2) a control station on Earth, and (3) a device (.e.g., your phone) to receive the signals from the satellites. Your device receives signals from several satellites, and calculates the distance between the receiving device and the satellite. By measuring the amount of time it took for the signal to reach your device and using basic geometry, the GPS can determine how far away the satellite is. Using distances from at least 4 satellites can further pinpoint the exact position of the receiving device.

In theory the principle behind GPS is fairly straightforward, but in practice the Earth’s non-spherical shape makes accurate measurements challenging. This is where Dr. West enters the picture.

Dr. West worked at the Naval Surface Warfare Center in Virginia in 1956 to program the then massive computers. The second Black woman hired as a programmer there, she helped pioneer a groundbreaking study proving the regularity of Pluto’s motion relative to Neptune. Dr. West was promoted to project manager following this and led the Seasat radar altimetry project. Prior to this project, accurately measuring the distance across the Earth’s surface or between Earth and objects like airplanes and weather balloons was intractable. This stemmed from Earth’s imperfect spherical shape, largely due to the influence of oceans and sea level variation around the world. Seasat was significant because it was the first satellite that could sense oceans using altimetry, which uses radar to measure the altitude of an object. 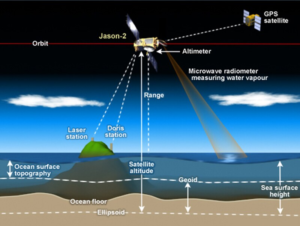 Dr. West used the data from Seasat and other satellites to develop a sophisticated mathematical model of the true shape of the Earth, known as a geoid. This laid the foundation on which modern GPS is based. With a more accurate representation of the Earth in hand, calculating altimetric distances would be a lot easier and more accurate than just treating the Earth as a smooth sphere.

While she made monumental contributions, it was not easy as a Black woman in the racially segregated south during this time period. As a government employee, she couldn’t participate in the ongoing civil rights protests. She, her husband, and fellow Black co-workers instead protested silently through their work, seeking to erode the stigma Black people faced. “… you gotta show them who you really are,” she explains in an article in The Guardian. “We tried to do our part by being a role model as a black person: be respectful, do your work and contribute while all this is going on.” This elevated her through the ranks, earning the respect and admiration of her colleagues, whilst indirectly challenging their preconceived notions of Black people.

West always knew that she wanted more from life than what was the norm for a Black woman at the time. She saw education as her ticket out, working hard and graduating high school as valedictorian, which earned her a scholarship to study at Virginia State University. There, she majored in mathematics and was a member of the Alpha Kappa Alpha sorority – the same sorority of which Vice President Kamala Harris is an alumna. She taught math and science after graduating before returning for her Masters degree in Mathematics two years later, followed by her employment at the Naval Warfare Surface Center the succeeding year, where she did her pioneering work in orbital resonance and creating the geoid model. She worked there for 42 years before retiring, but didn’t retire her intellect; despite suffering from a stroke that hindered her mobility, a breast cancer scare, and other medical challenges, she persevered and earned her Ph.D in public administration from Virginia Tech in 2018. She almost gave in to her ailing body until “all of a sudden, these words came into my head: ‘You can’t stay in the bed, you’ve got to get up from here and get your Ph.D.’” She and her husband subsequently began exercising regularly, while also exercising her mind as she worked towards her Ph.D.

Like the Black women featured in Hidden Figures (and many other women and people of color across history), her achievements went unrecognized and under appreciated for a long time. When submitting a short biography for an Alpha Kappa Alpha event, she briefly touched on her pioneering work in GPS technology. This caught the attention of her sorority sisters who helped bring West’s story to the forefront. Soon after, accolades began trickling in, including official recognition from the United States Military, which inducted her into the U.S. Air Force’s Hall of Fame, honored as one of “the leaders of the early years of the Air Force space program.”

Ironically, despite the ubiquity of the GPS, West herself doesn’t use it often as part of her daily life, instead preferring paper maps, citing that “the data points could be wrong or outdated,” according to her oldest daughter, Carolyn Oglesby. The mathematician’s mind never rests.