It’s been one year since COVID-19 launched us into a real-life game of Plague Inc. And if you’re anything like the rest of humanity, your mind is probably melting from pandemic boredom. You’ve done the sourdough thing, you’ve binged every new Netflix show, and you’re itching for summer weather. You’re in need of a new quarantine-friendly hobby—at least until you can land a vaccine appointment. Well, if you’re interested in ancient artifacts, bygone civilizations, and the broad arc of human history, look no further than citizen archaeology to fill that void. It’s fun, it’s edifying, it serves the public good, and you can do it from the comfort of your own couch—pants or no pants.

What is Citizen Archaeology?

Citizen archaeology is like any other citizen science. It calls upon members of the public to generate new scientific knowledge through participation in data collection and analysis, often in collaboration with professional archaeologists. Many citizen archaeology efforts rely on crowdsourcing—or the practice of enlisting a large number of volunteers to achieve research objectives or fund promising new projects. Harnessing the power of the people through crowdsourcing is an efficient way to complete a range of tasks that would otherwise take archaeologists many years and dollars to complete, such as identifying archaeological sites in satellite images, transcribing excavation notes, or reporting and recording artifact findspots. 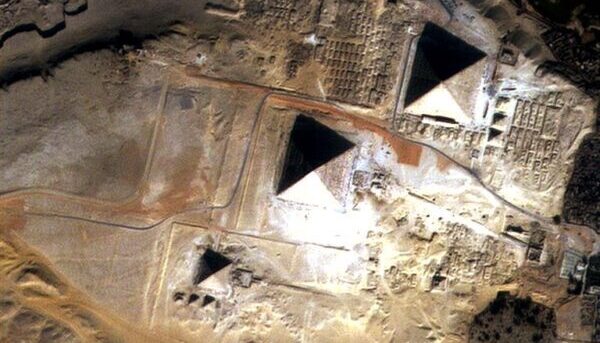 Satellite image of the Giza Pyramid Complex in Cairo, Egypt. From EIAST.

But more importantly, crowdsourcing allows archaeologists to engage with the public on pressing cultural heritage issues, both locally and globally. Unfortunately, archaeological resources worldwide are under constant threat as growing cities, expanding infrastructure, and heightened conflict continue to destroy sites, spur artifact looting, and feed the illicit antiquities trade. Crowdsourced citizen archaeology projects help raise awareness of at-risk archaeological resources by involving the general public in responsible research that aims to preserve and protect the past for the benefit of our future.

An added boon is that many of these crowdsourced initiatives are web-based, perfect for quenching your desire for a new pandemic pastime while also contributing to a praiseworthy pursuit. Here are three ways to become a responsible citizen archaeologist while you’re waiting out the pandemic.

GlobalXplorerº is a virtual platform that uses “crowd+AI+blockchain” to locate and protect archeological resources around the world. The initiative asks citizen archaeologists to scan satellite snapshots of the Earth’s surface and flag possible undiscovered archaeological features or examples of site destruction. GlobalXplorerº was founded by famous space archaeologist Dr. Sarah Parcak, a TED Prize winner, National Geographic Fellow, and one of the first archaeologists to utilize satellite imagery in their research.

Most recently, GlobalXplorerº completed its first expedition, which focused on ancient Peru. More than 70,000 people took the time to scour nearly 15 million satellite images of the country’s Sacred Valley. In the end, they identified 19,084 potential archaeological features, 342 of which may be large and important settlements. Now, the project hopes to ground-truth these discoveries and protect sites from looting. And while its Peru expedition is all wrapped-up, GlobalXplorerº is set to launch another expedition in India — so keep your eyes peeled for this upcoming opportunity to become a citizen archaeologist. You can follow their Medium page for updates.

Founded by a group of community-minded archaeologists in the UK, DigVentures is an online platform that encourages the public to take part in archaeological and cultural heritage projects around the world through several channels. It’s a little bit like Kickstarter for archaeology. Users can log on and contribute funds to a number of ongoing archaeological excavations and cultural preservation efforts. Through site diary blog posts, the platform also allows users to check in on the progress of these projects once they break ground. When a project has been completed, contributors can access a summary of its findings as well as information about future research.

In addition, DigVentures hosts a variety of free online talks and events, many of which are geared towards involving the public in upcoming citizen archaeology efforts. If you want even more content, users can enroll in DigVentures’s introductory short courses, which cover topics like excavation basics and 3D artifact modeling. To access these courses, which have been endorsed by the Chartered Institute for Archaeologists, subscribers are asked donate about $5 per month—around the same cost as a streaming service. Don’t want to pay? Don’t fret! DigVentures also posts great archaeology news stories and maintains a virtual museum with 3D artifact exhibits for citizen archaeologists to explore.

Can’t decide what kind of citizen archaeologist you want to be? Check out MicroPasts. Sponsored by University College London and the British Museum, MicroPasts serves as a virtual clearinghouse for crowdsourced archaeology projects. The platform connects professional archaeologists with volunteers who sign up to help complete essential research tasks that require human—rather than artificial—intelligence. The tasks are diverse, asking users to digitize artifact data, prepare photos for 3D modeling, transcribe historical field notes, or tag archival images. MicroPasts’s projects have varying regional concentrations, including Egyptian archaeology, Near Eastern archaeology, and British prehistory.

With no training needed, users can hop online and begin contributing to meaningful archaeological research at their own convenience. Since October 2013, more than 2,200 people have participated in the crowdsourced projects hosted by MicroPasts. And to inject a little more fun into the platform, MicroPasts awards imaginary points to users for their contributions. The site tallies these points on a community leaderboard, which provides a ranking of the platform’s top 20 most dedicated citizen archaeologists.

So, if you can’t stand quarantine for one more second and want to do something more productive than trying to cut your own hair, become a responsible citizen archaeologist. Do a little online excavation and you may uncover your new favorite pandemic hobby.