Each bacterial cell is independent – it can survive and replicate on its own. However, bacteria do work together to achieve common goals. Good communication is vital to teamwork, and bacteria are no exception. Instead of words, bacteria rely on small chemical messenger molecules named autoinducers or quorum sensing molecules.

Autoinducers are produced by bacteria and secreted into their surrounding environment.  These small molecules disperse at low cell density but begin to accumulate as bacteria grow. They are named autoinducers because they can induce, or turn on, their own production. Once a sufficient number of bacteria are present, forming a “quorum”, autoinducers turn on genes that regulate group activities such as bioluminescence, biofilm production, and toxin production and secretion. These group behaviors aren’t advantageous for a single bacterium but are quite effective when larger numbers of bacteria are present (in an infection, for example).

Quorum sensing was discovered in the gram-negative bacteria Vibrio fischeri (recently re-classified as Aliivibrio fischeri). These marine bacteria do not exhibit bioluminescence when living free in the ocean, but only when living symbiotically with organisms such as the Hawaiian bobtail squid. In the confined environment of the squid’s light organ, Vibrio fischeri can use quorum sensing to communicate and become bioluminescent. Vibrio fischeri use a collection of genes, luxA, B, C, D, and E, to produce the luciferase enzyme and substrate that they need to produce light. Two genes are required for quorum sensing – luxI which encodes an enzyme that produces the autoinducer, and luxR which encodes a regulatory protein that “hears” the signal. Vibrio fischeri use a class of autoinducers named acyl-homoserine lactones (AHLs) to communicate. Many other gram-negative bacteria use AHLs as “words” in the LuxI/LuxR quorum sensing “language” system, including pathogens like Pseudomonas aeruginosa. Instead of bioluminescence, however, Pseudomonas aeruginosa use quorum sensing to turn on the production of toxins that can make an infected human very sick.

Now, since bacteria can “talk,” what do they have to say? Well, just like us, they can share both positive and negative messages, sometimes simply by re-arranging the same words! 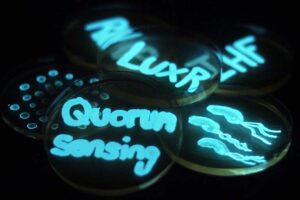