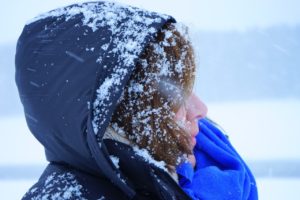 Winter is officially still three weeks away, although the alternating 30° F nights and 75° F days makes that difficult to remember. The arrival of winter means that it is less pleasant to be outside, there are fewer hours of sunlight, and it is harder to get out of bed in the morning. Most Southerners don’t really enjoy the winter. But here are three ways really cold temperatures actually help physicists in their quest to understand nature.

Some telescopes must go to the extreme cold in Antarctica. The South Pole Telescope is recording some of the first light from the universe. This light, called the Cosmic Microwave Background, contains clues to help astronomers understand what makes up the Universe and how that has changed over time. The high altitude and low temperatures in Antarctica make it possible to see these radio waves, as there is less water vapor present in the atmosphere to absorb them when compared to other regions. For a fascinating account of what it is like to work with the South Pole Telescope, check out Keith’s blog from his time there.

The colder weather is a great reason to go to a star party over the next few months. For people living in the Triangle, the Morehead Planetarium teams up with the Chapel Hill Astronomical and Observational Society to stargaze about once a month at Jordan Lake. You can see the full schedule here.

When you think about how things move and interact, you are most likely pondering what physicists refer to as classical mechanics, the motion of relatively large things. But quantum mechanics deals with how tiny, individual atoms and particles move and interact with their environment. However, quantum mechanics is difficult to study because atoms move quickly at room temperature. When the temperature drops, though, atoms lose energy and slow down. This enables physicists to study some of the strange quantum mechanical properties of atoms. For example, at temperatures around -459° F, individual atoms can gather together and begin acting collectively like a single atom. At the coldest possible temperature, known as absolute zero (-459.6° F), atoms lose all their energy and stop moving. This phenomenon of particles acting as a group only occurs close to absolute zero, forming a state of matter known as a Bose-Einstein condensate. First created in a laboratory in 1995 and winning the Physics Nobel Prize in 2001, Bose-Einstein condensates help physicists study some of the strange quantum mechanical properties of atoms and how they interact in extreme conditions.

The Large Hadron Collider (LHC), a 16.7-mile long particle collider on the border of France and Switzerland, operates at -456° F, slightly warmer than the temperature required for Bose-Einstein condensates. Before colliding, particles can travel around the ring thousands of times. To keep particles along the track before colliding, the LHC uses strong magnetic fields generated by superconducting materials. Electric current is required to make the magnetic fields, which often generates heat (think of how cell phones heat up during charging). Superconducting materials, instead, create very little heat when cooled down to very low temperatures, creating the right conditions for physicists to use them at the LHC. These conditions enable the LHC to investigate the building blocks of nature.

So the next time you are fretting over the cold, perhaps you can remember the physicists who need the cold to make discoveries happen.