Chlorophyll is routinely monitored in recreational water resources and actively removed from drinking water at treatment plants. So why is it trending as a new health shot?

I was enjoying a reunion weekend with a friend from college when we met up to compete in a beach volleyball tournament. Following our games, like stereotypical millennials, we decided to refuel at a nearby smoothie bar. 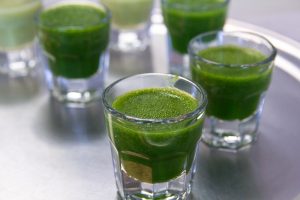 We perused the menu, discussing whether or not we thought wheatgrass or other trendy health shots had actual nutritional benefits. And that’s when I saw it: a new green drink infused with liquid chlorophyll. Now this particular ingredient caught my eye, because I’m an aquatic biologist by training. Chlorophyll is probably one of my top-ten-most-used-vocabulary-terms, but I typically wasn’t reading it on my weekends.

You probably remember learning about chlorophyll in middle school. In short, it’s a green pigment found in most plants that absorbs sunlight to convert it into energy via photosynthesis. Water quality researchers utilize chlorophyll-a concentration as a proxy for algae in water resources. High levels of chlorophyll mean unbalanced algal growth, and sometimes even toxin-producing harmful algal blooms, which threaten public health. In 2014, a toxic bloom of blue-green algae even shut down a drinking water facility in Toledo, OH, leaving the community without safe water for weeks.

While chlorophyll content is mostly associated with algal species that are not harmful to human health, in my mind, any drink with extra chlorophyll was the opposite of what I wanted to consume. So it got me curious, what is in this liquid chlorophyll additive? and what are its supposed health effects? I had already read stories about the dangers of spirulina —another health extract from blue-green algae—but the chlorophyll was new to me and had apparently already gained popularity through TikTok. Similar to overstated skin care routines and meal replacements, chlorophyll was not the first, nor the last, not-so-scientifically-accurate health trend to spread on such platforms.

The active ingredient in most liquid chlorophyll is copper chlorophyllin, a liquid extract of chlorophyll from the white mulberry (Moras alba) leaf. Other ingredients vary from brand to brand, but always include some form of glycerin preservative and purified water. Advertised health benefits claim to clear up skin, fight fatigue, reduce body odors, and improve overall wellness.

I spoke with UNC PhD candidate Emily Seiger, who studies global nutrition in the Gillings School of Global Public Health. I wanted to hear from a nutritional expert on the likelihood that boosting one’s chlorophyll consumption could actually have so many health benefits. “All nutritional supplements, even common vitamins, are not regulated by the FDA, so it [liquid chlorophyll] has likely not been scientifically assessed adequately.” She assured me that there is no reason for alarm, as there are plenty of foods we eat, including dark leafy greens, that are jammed packed with chlorophyll. However, the health benefits from liquid chlorophyll are unlikely to rival those of kale. “Micronutrients such as vitamins, fiber, iron, or minerals in our food don’t act alone in terms of improving health outcomes. Often, several are needed to work together to be absorbed in the body. Chlorophyll alone, like with most compounds we consume, is unlikely to be a cure-all.”

With some deeper digging, I found that green dietary supplements from the Moras alba leaf have been sold in pill form for much longer than liquid chlorophyll. While the ingredients differ, the liquid chlorophyll fad is a clear rebranding of Moras alba products to track current health ploys. Purchasing these supplements is likely a waste of money, and has about the same value as adding green dye to your beverage. While chlorophyll water is not threatening anyone’s immediate health, it’s unlikely to unlock the door to immortality.

Next week, another green, mystery liquid may materialize in my sphere, but I will hold out hope it will be on my social media timeline and not in my local drinking water supply!

One Reply to “Chlorophyll: removed from your drinking water, added to your smoothie.”