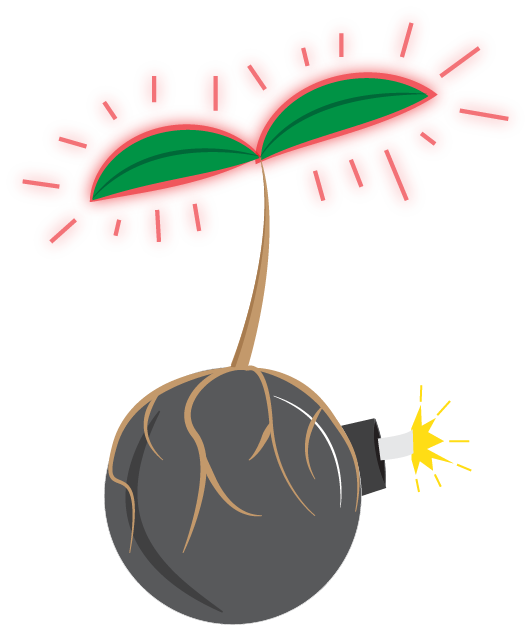 Imagine a future where the plants in your garden not only grow delicious vegetables, but keep an eye on the soil and water conditions while they’re at it. Is the ground too acidic? Are there toxins present in the water? It would be pretty handy if our plants could tell us the answers, right? That’s probably still a long way off, but last month researchers Min Hao Wong and Juan P. Giraldo at MIT published an article on a new type of biosensor (that’s a sensor that incorporates some kind of a biological system), which might take us a couple steps closer to such a reality.

The article describes how plants implanted with specially prepared carbon nanotubes in their leaves can detect a compound in their water that is associated with explosive materials. On top of that, the signal the plants produce can be easily detected from a distance with a smartphone.

Here’s how it works: Carbon nanotubes are tiny, tiny, tiny cylinders of carbon atoms that occur naturally and can be synthesized in the lab. They are amazingly strong, even stronger than steel when they’re made into fibers. And they have unique optical properties, producing near-infrared light that responds to slight changes in the surrounding chemical environment. Additionally, the nanotube response to chemicals can be modified by coating it in different substances.

The Strano lab at MIT figured out that, with a particular coating, the intensity of light emitted by nanotubes changes in response to nitroaromatic compounds commonly found in explosives. By implanting these coated nanotubes into the leaves of spinach plants, they could detect changes in the infrared signal as the plant absorbed the target compound. That’s pretty incredible because they harnessed the plants natural function of absorbing material from the earth and water, to make a biosensor.   What makes their work even cooler is that they were able to put together a simple smartphone system that let them check on their plant bomb detectors from a distance. Practically, such a biosensor could help detect nearby explosives by picking up on specific chemicals the explosives leach into the ground water. While a lot of work on developing biosensors has focused on directly manipulating the organism’s genome (think CRISPR/Cas9) such that it can respond to certain inputs, this work demonstrates a way to make biosensors without any genetic engineering. That gets around a lot of worries about using genetically engineered biosensors in the wild.

This technology isn’t at the level where we’ll have crops engineered to broadcast environmental data to the cloud, or send you text messages when there are dangerous chemicals present, but this work makes a future where the line between biology and digital technology is blurry if not totally intertwined.