We eat (or drink) them all the time, but what about in the lab? For scientists, yeast has been an invaluable tool for making biological discoveries. 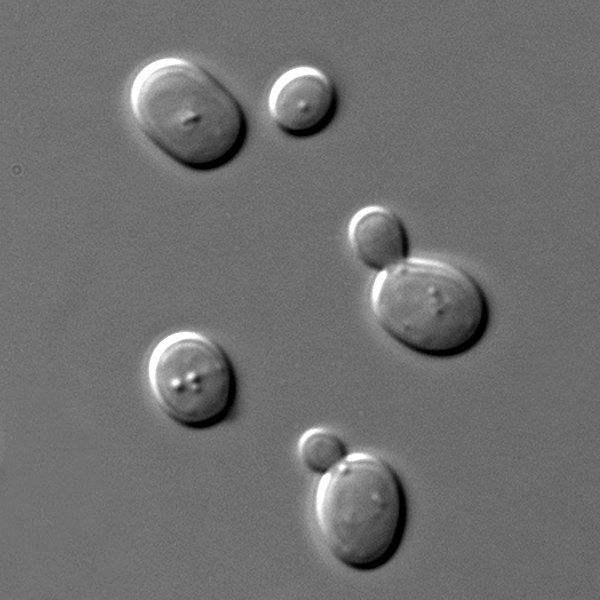 About 7000 years ago, humans stumbled upon wine by using the awesome fermentation power of yeast, turning sugars into alcohol.  Since then, humanity has continued to use yeast to create food and beverages, giving rise to brewing, baking, and distilling.  While many of us consume yeast products daily, these organisms have just as many (or more) uses in the lab as they do in the kitchen.

Starting in the 1930s, scientists began to use budding yeast (Saccharomyces cerevisiae, also called baker’s or brewer’s yeast) to explore basic biological processes.  Just like our own cells, these single-celled organisms are eukaryotic (where DNA is enclosed in the nucleus) and share many similarities to human cells regarding cell cycle regulation, which describes how our cells divide, and signaling pathways, which describe how groups of molecules control different functions within a cell.  At least 20% of human genes known to play a role in disease have homologs (genes with similar functions) in yeast, meaning that yeast can often be used as a model for human diseases.  Compared to mammalian cells, yeast is inexpensive and easy to culture, and it is less complicated to manipulate than animal models like mice or rats.  In 1996, the yeast genome became the first eukaryotic genome to be fully sequenced.  Since scientists were able to figure out the code that makes up all the DNA in yeast, these organisms became an invaluable model for genetic studies.

Scientists have used yeast to explore many basic mechanisms that have far-reaching implications.  As a genetic disease, cancer often results from mutations in genes that control cell cycle regulation or DNA repair.  Pioneering yeast studies by researchers such as Leland Hartwell, who received a Nobel Prize for his work, identified the genes involved in cell cycle control, called cell division cycle or CDC genes. Hartwell and colleagues’ findings regarding these genes led to important discoveries about how cancer begins.  Yeast has also been used for drug discovery.  A 2015 study found that the human version of yeast genes can be successfully replaced into yeast, allowing for rapid screening for the effects of drugs on human proteins.  Studies with yeast have even progressed our knowledge of neurological diseases.  Aggregation of a protein called alpha-synuclein in the brain has been associated with Parkinson’s disease and dementia.  In yeast, overabundance of this protein reduces survival, much like the brain cell death seen in humans.  Yeast has become a malleable and efficient model for alpha synuclein-related diseases, or synucleinopathies, and has proven to be an effective way to examine the basic molecular pathways that lead to these impairments.

Experts in biology have repeatedly acknowledged the groundbreaking findings from yeast research for their contributions to science.  To date, there have been 5 Nobel Prizes awarded for research using yeast for a wide variety of biological discoveries.  Biologists have even honored yeast with a music video, giving yeast a much-needed shout out.

While there’s no doubt that yeast has made an impact on our culinary culture, there is far more to these tiny organisms than just baking and brewing.  Yeast has greatly contributed to our understanding of genetics, cell cycle regulation, diseases, and so much more.  So the next time you’re enjoying a cold one in the evening, give a cheer for the awesome genetic power of yeast.