What do you imagine when you think of the desert? I grew up in the desert and I think of dry hot days and clear cool nights. I think of my home town where mountains and a vast sky surround us.  I think of sand and dust which permeates all crevices and openings. I think of low-lying scrub bushes and an ecosystem that, while not as diverse as the Amazon rain forest or the oceans, is certainly unique. 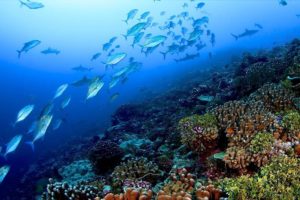 It’s hard to imagine two more different places on earth in terms of environment and animals. So what is the connection between the two, between the desert and the oceans? Dust.

Around 450 million tons of dust enter  the world’s oceans every year, and two-thirds of this dust comes from the Sahara desert. The dust from deserts can stay in the air for weeks and travel thousands of miles. The dust from the Sahara desert travels across the Atlantic ocean and deposits into the Caribbean Sea or even in the Amazon rainforest. This dust carries vital nutrients such as phosphorus, nitrogen, and iron, which are especially important to ocean ecosystems.

However, as fantastic as I think dust carried on the wind and contributing to the world’s ecosystems is, there can be some downsides. For example, when a lot of dust enters the ocean in   a short amount time due to dust storms in the Sahara desert, phytoplankton can create  overgrown blooms. These overgrown blooms can actually deplete the oxygen in the surrounding water and cause a dead zone in the ocean.

Despite the previously stated downside to dust, the ocean needs the desert. We, as a species, need the desert. So the next time you are thinking of the desert, think of the dust and where it’s going.