JoEllen McBride
January 17, 2017January 17, 2017 /
In the past, the largest obstacle that separated humans was distance. In the first half of the 20th century, we built machines that made it possible to drive non-stop from Wilmington, NC to San Diego, CA in one and a half days or to fly the same distance in just five hours. As soon as we conquered these terrestrial distances, humans set their sights on the cosmos– but space has a lot of space.
Rockets provide the speeds necessary to send humans to the Moon and rovers to Mars. It seems humans have once again conquered vast distances to reach previously unreachable lands. We can travel from the East Coast to San Francisco in under 5 hours, but that doesn’t mean people in rural North Carolina do it. The Moon is our closest celestial neighbor, but that doesn’t mean you will notice a difference in size between full moons each month. We can travel to Mars in as little as 60 days, but that doesn’t mean it’s close enough to Earth to appear as big as the Moon. Any species with our technology could, in theory, colonize the galaxy in a few million years, but that doesn’t mean it’s been accomplished.
Understanding the space of space not only provides us a cosmic perspective, it gives us the ability to question fantastic memes and eases our disappointment when a celestial event isn’t as spectacular as promised.

You may have seen posts on social media telling you to look up at the full moon on November 14th, 2016. At that time, the Moon was the closest that is had been to Earth since 1948. When the Moon approaches the full moon phase and is closest to Earth, we call that a supermoon. It’s not quite as rare as it sounds; there were actually three supermoons in October, November and December of last year. The thing is, while the Moon may be closer to Earth in its orbit, it is still really far away. Travelling at jet plane speeds, it would take you 16 to 19 days to get to the Moon. The Apollo astronauts, however, could reach lunar orbit with their rocket in under 10 hours. Compared to more familiar distances, the Earth-Moon distance is 100 times larger than the Wilmington-San Diego distance.

Another way to visualize the distance to the Moon is to look at how big it appears to us here on Earth. At over 2000 miles across, a little less than the Wilmington-San Diego distance, this large body is so far away that it always appears less than an inch wide to us in the sky. During the three full moons in October, November and December, if you were to hold your hand a foot away from your face and try to hold the full Moon between your thumb and pointer finger, the space between your fingers would only change by one-thousandth of an inch each month– less than the thickness of a sheet of paper.
On Friday, June 9, 2017, when the Moon is farthest away from Earth, what is known as a micro moon will occur. On that day, your fingers will be one-hundredth of an inch closer together than during the supermoons– about the thickness of a standard business card. An untrained eye would never notice a difference. So, if you were less than impressed by the supermoon in November, it’s totally understandable. 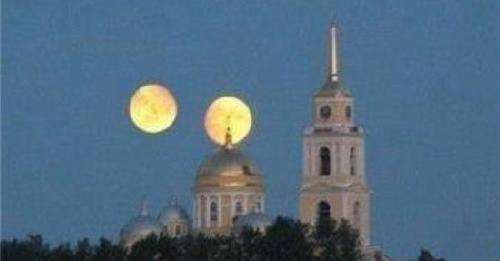 Every summer, this meme pops up in my news feed. It claims that Mars will be so close to Earth that it will appear as big as the Moon. While the distance between the Earth and Mars varies significantly as both planets orbit the Sun, as they move closer to each other it would still take 52 days to get to Mars on one of our rockets. This is because even at their closest, the Earth-Mars distance is ten thousand times the Wilmington-San Diego distance and well over 100 times the Earth-Moon distance. If we think about this in terms of how big Mars looks to us, at two times the width of the Moon, Mars would need to be placed at twice the Earth-Moon distance to appear the same size as the Moon to us Earthlings. Mars’ orbit will never let this happen. Mars will always appear as a red point of light.

No matter how many articles have been written debunking this ‘double moon’ hoax, it’s survived for 13 years. We easily fall for this meme because we’ve heard of probes and rovers being sent to Mars in less than a year’s time but we lack the perspective of how fast these spacecraft are travelling and the distances they are able to cover.

Interstellar Travel: Where are all the aliens?

When we talk about travelling to places beyond our solar system, we immediately think about aliens and enter the realm of speculation. This can be fun, but we have to be careful. The distances we are working with are significantly larger than the distances we cover within our solar system. Travel time becomes a much bigger issue.
The average distance between stars in our galaxy is 4 light years or 23 trillion miles– one million times the Earth-Mars distance and ten billion times the Wilmington-San Diego distance. With our current technology, it would take approximately 100,000 years to travel this distance. We could start by sending one ship to the recently discovered Earth-like planet orbiting Proxima Centauri, the closest star to our Sun. Once there, we would need to establish a community. Less than 500 years passed between Christopher Columbus sailing the ocean blue and the Apollo moon landing. Just to be generous, let’s say it takes 1000 years to settle down and establish a space flight program on a new planet.
So humans would now have two colonies that could send ships out. With this strategy, we could double the number of worlds sending out new ships every 101,000 years. That would mean after just 505,000 years we’d be sending ships out to 32 planets. After 1 million years, 956 planets. And after just 4 million years, 800 billion planets. Astronomers estimate that half of the 200 billion stars in our galaxy have planets. In one thousandth of the time it took for Earth to form and evolve intelligent life, a space-faring species could have colonized all the planets in our galaxy eight times over. This begs the question: where are all the aliens?
Although we can calculate an average distance of 4 light years between the stars in our galaxy, our own Sun only has one star with a planet within that distance. The next closest star after Proxima Centauri is 6 light years away. If we were to continue sending out ships as described above from Earth, the travel time would no longer be 100,000 years but 165,000 years. The next closest star is 6.5 light years. Again, increasing our travel time. Astronomers have yet to detect planets around either of these stars, so why would we even go to them? It seems a more realistic approach would be to send out a new ship every 101,000 years from the planet we just colonized. This strategy would require 100 trillion years to visit all 100 billion stars– 100,000 times longer than the age of our solar system and 10,000 times longer than the age of the universe. So while these are a fun exercises, they are not realistic ways for any civilization to conquer the galaxy.
The space of space is huge. Understanding its vastness not only makes you less susceptible to bogus memes, it gives you a better perspective of how far humans have come in our quest to explore and how far we still have to go.