Geoengineering, or the deliberate modification of Earth’s natural systems to control the climate, has recently shifted out of the realm of science fiction and into the world of potential reality. So what’s the science behind climate geoengineering, and how can we ensure only good comes of its use?

Once upon a time, the idea of perturbing a planet’s natural systems to control its climate, a.k.a. climate geoengineering, was the stuff of science fiction novels. However, as climate change becomes an undeniable reality for an increasing portion of the world’s population, scientific and political discussions about using geoengineering to mitigate climate change have become more prevalent. For some, the possibility of humans using geoengineering to stabilize Earth’s climate is a source of hope – but for many others, it is a source of deep apprehension. The polarizing nature of this topic reflects how important it is to be informed on the science behind geoengineering and the policies surrounding its implementation. Before we delve into the science of climate geoengineering, we first need to understand how different geologic and geographic characteristics of an area come together to determine its climate.

A hitchhiker’s guide to Earth’s climate

An area’s climate is defined as the long-term weather patterns common to that area, i.e. the average temperature and precipitation that area experiences.

The average amount of precipitation an area receives is also determined by a balancing act – but in this case, the balance is between how much water enters the atmosphere and how much of it returns to the ground through the formation of clouds and raindrops (i.e. precipitation). Like temperature, cloud and raindrop formation are affected by several geographic and geologic factors, many of which are outlined in the table below.

Water and heat fuel climate change down the road

High temperatures and atmospheric water vapor form a positive feedback loop – that is, more of one makes more of the other. This positive feedback loop, along with other feedback loops related to climate, means that climate change will likely accelerate over time. To make matters worse, Earth’s climate has a lot of thermal inertia, i.e. it responds slowly to changes in temperatures (and factors that affect temperature, such as the atmospheric concentration of CO2). The climate’s slow response to changes in atmospheric CO2 levels arises from two sources – the first is the persistence of CO2 in the atmosphere, and the second is water’s ability to hold a lot of heat. All of this, together with the fact that over 90% of the warming that has happened over the last 50 years has occurred in Earth’s oceans, means that even if the entire world stopped emitting CO2 tomorrow, it might not be enough to mitigate some of the unpleasant effects predicted to come about from just a 2 °C rise in average global temperatures as soon as 2032. This begs the question – is there something more we can do to help stabilize the climate before it gets even further out of control?

Geoengineering approaches to stabilizing the climate 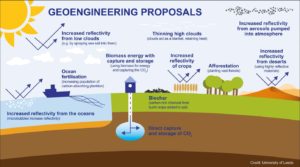 Ideas that fall under GGR include:

Ideas that fall under SRM include:

Why geoengineering is risky business

Despite the need for quick and sweeping action to stabilize Earth’s climate, some serious problems remain for nearly all of the geoengineering approaches mentioned above. The first and perhaps most formidable problem with geoengineering is that there is a lot of uncertainty about how many of these approaches would play out in the real world – meaning there could be unintended and far-reaching side effects. For instance, a small-scale ocean seeding “experiment” led by the Haida Salmon Restoration Corporation back in 2012 ended up creating a huge, unanticipated algal bloom in the Pacific Ocean. A second major problem with geoengineering is that many of the approaches (particularly those that fall under SRM) would require continuous, long-term upkeep, which necessitates a higher level of international cooperation and stability than can be guaranteed at this time. Lastly, many people are concerned that if we are not careful, geoengineering may be used by fossil fuel companies as both a distraction and a tool to continue polluting the air and environment.

Proceed with caution, research, and regulation

In early 2019, several high-profile scientific journals published papers outlining a course of action that might allow us to reap the benefits of geoengineering while avoiding the potential pitfalls mentioned above. These papers state that we must continue both experiment- and simulation-based research into geoengineering technologies for climate moderation, but that we need to shift our research approach from curiosity-driven to mission-driven, i.e. “defined by [an] explicit end goal of supporting informed future decisions regarding deployment.” In practice, this means that future geoengineering research should aim to answer at least two of the following questions:

The complexity and interconnectedness of the global climate system means that in addition to doing more mission-driven research on geoengineering, we must also work together at an international level to avoid “climate accidents” by introducing more regulations on geoengineering research and deployment. Unfortunately, to date there have been relatively few attempts to regulate geoengineering globally, with much of that regulation taking the form of bans. Advancement toward the establishment of international geoengineering governance began at the United Nations Environment Assembly earlier this year after Switzerland introduced a resolution calling for an “assessment of the potential methods [of geoengineering] and governance frameworks for each one by August 2020”, but unfortunately this resolution was blocked by the United States and Saudi Arabia.

As the saying goes, high rewards often come with very high risks, and geoengineering is no exception. Given the sheer scale of both the risks and rewards associated with geoengineering-based climate solutions, we must remain informed on who is geoengineering what, where, and how. Moreover, we must demand that our legislators do more to ensure that even “small-scale” geoengineering tests are deployed with the utmost caution, transparency, and consideration for all communities that could be affected.