If you have any interest in science and have ever contemplated your existence within the confines of this universe, chances are that you’ve come across an interactive Flash-based animation called “The Scale of the Universe.” Developed by two 14-year-olds, Cary and Michael Huang, this animation allows the user to scroll through the entire universe, to scale. You can begin at a level that encompasses the entire known universe and scroll your way down 62 orders of magnitude through galaxies, planets, human beings, and individual cells, all the way to the tiniest subatomic structures.

Speaking of those subatomic structures, we’ve all heard that they exist and that they are the foundation of everything. However, these tiny, weird constituents of reality are often ignored on the everyday, macroscopic scale. Many scientists have assumed that once trillions of atoms come together to form an organism, such as a human, quantum effects are diluted. However, physicists such as Erwin Schrödinger (of Schrödinger’s cat fame), Niels Bohr, and Albert Einstein (to name a few) didn’t ignore the quantum realm, and as it turns out, neither should you. There’s substantial evidence that the weird, short-lived processes of quantum physics directly and meaningfully influence things on a physiological scale.

Here are 6 ways in which quantum mechanics potentially affects life on a physiological level:

1)   Photosynthesis works because of quantum coherence. 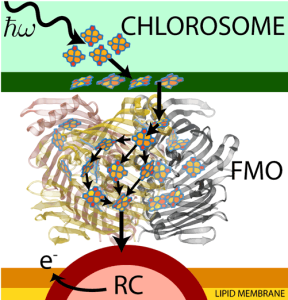 Researchers have shown that green sulfur bacteria use quantum coherence to efficiently transfer the energy of a photon to a reaction center (RC) where photosynthesis takes place. Quantum coherence is the principle by which a subatomic particle can act as a wave and travel multiple paths at once. When a photon of sunlight strikes a pigment on a chlorosome of a green sulfur bacterium, the energy is transferred through pigments in the Fenna-Matthews-Olson Complex (FMO) on its way to the RC. Quantum coherence allows this excitation energy to scope out all of the routes it could take on its way to the RC and it can “choose” the most efficient pathway. (See diagram at left.)

Insects, birds, and other species somehow use the relatively weak
electromagnetic field of the earth to navigate during times of migration. How do they achieve this feat? It is theorized that European Robins do this via quantum entanglement; that is, the ability of two subatomic particles to remain in instantaneous communication with one another across vast distances. In the case of this robin, there is a protein called cryptochrome within the retina of the bird that contains two electrons on different parts of the molecule that are sensitive to changing electromagnetic forces. These electrons shift and move in a delicate dance that allows the bird to adjust its flight pattern appropriately.

Enzymes are great at taking time-consuming chemical reactions and speeding them up. They bend molecules into different shapes and are able to grab and hand off reactive groups between chemical constituents… or are they? Instead of the grab-and-pass model many biologists and chemists think of when imaging enzyme catalysis, it is  hypothesized that enzymes take advantage of quantum tunneling. When a particle undergoes quantum tunneling, it instantaneously “teleports” from its current position to a new position in space.

It’s fairly difficult to overcome the repulsive forces involved when trying to smash two protons and their positive charges together. However, our sun does this all of the time when fusing hydrogen atoms into helium. This process is necessary for the life-sustaining energy from the sun that travels to Earth, and it’s accomplished through quantum tunneling.

5)   Your nose can smell quantum differences.

The human nose can detect over one trillion distinct odors. Our genome is pretty amazing, but not amazing enough to produce one trillion separate smell-detecting receptor proteins. So how do we delight in the scent of daisies and gag at the stench of that yogurt we forgot we were eating when we started writing this article a day ago? It’s suggested that the receptors in our nose can sense differences between slight quantum alterations in molecules, such a molecule that contains a hydrogen atom versus the same molecule containing a deuterium atom (just a hydrogen atom with a neutron).

6)   Quantum tunneling may lead to mutations in DNA.

The idea that potentially cancer-causing mutations in DNA can spawn from quantum events is somewhat frightening. (How are we ever going to prevent cancer?) The idea here is that the hydrogen bonds holding DNA base pairs together on opposite strands of the DNA double helix can undergo a quantum tunneling event. For example, a hydrogen atom on adenine can fully jump over to the thymine molecule on the opposite strand. Then, when the DNA strands are separated during DNA replication, this extra, misplaced hydrogen atom can hinder the replicative machinery and lead to a mutation.

In addition to the aforementioned ways the world of the very, very small has an impact on our macroscopic world, there are also several theories examining how the brain functions with regard to quantum mechanics and how the reality we experience is a consequence of quantum events. Also, it should be noted, that most of the technology we depend on in the modern era works because scientists and engineers have learned to grasp the power of quantum physics (e.g. smartphones, computers, compasses, web security/cryptography, and microscopes, to name a few examples).

At this point, you may be experiencing some side-effects: 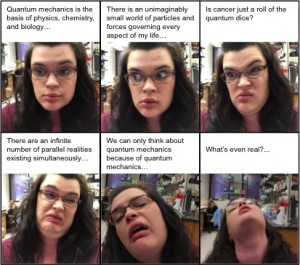 Don’t worry too much, though. To quote Niels Bohr: “If quantum mechanics hasn’t profoundly shocked you, you haven’t understood it yet.”

So maybe if you’re frozen between states of existential astonishment and horror, you’re a step closer to really appreciating how amazing our universe is.

If you’d like to learn more about the field of quantum biology, check out this TED Talk by nuclear physicst Jim Al-Khalili, this video featuring a lecture by science writer Philip Ball, or one of the following books: Life on the Edge: The Coming of Age of Quantum Biology, What is Life?, or The Amazing Story of Quantum Mechanics.

Follow us on social media and never miss a Weird Science story: