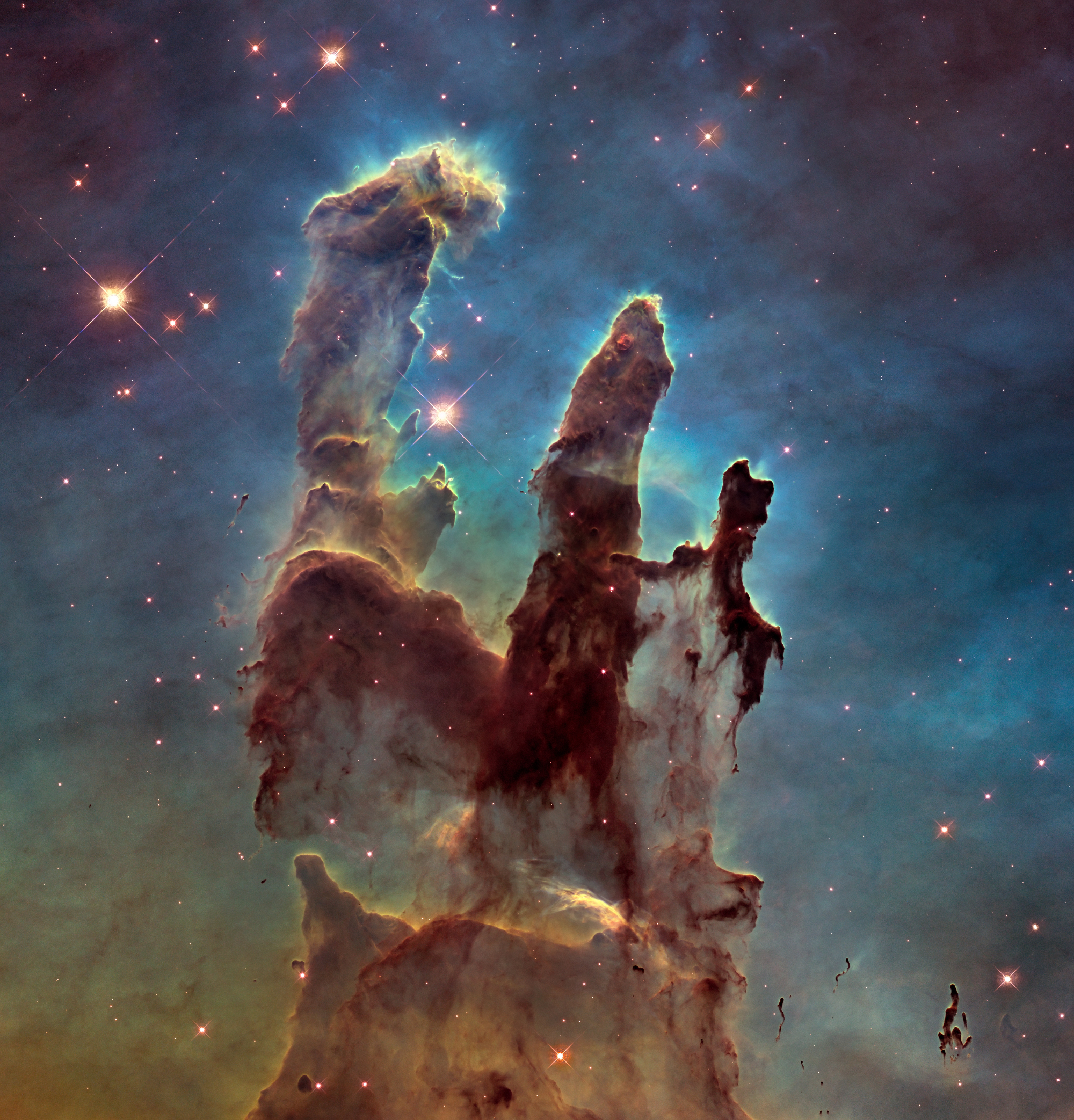 We like to think of the Universe as static. Our time is very short compared to the age of the Universe. But there are processes in space that happen on the time scales we inhabit. The variation in brightness of certain types of stars allow astronomers to measure the distances from the Earth to the galaxies where they reside. By taking images at different times over the course of a few years, the trajectories of stars orbiting the supermassive black hole at the center of our galaxy can be followed. And, using instruments like Hubble Space Telescope, we can see the destruction of large structures such as the Pillars of Creation.

The Pillars of Creation are a small part of the Eagle Nebula (pictured above), a huge expanse of gas (mostly hydrogen) and dust where stars are created. The entire structure is estimated to be 5 million years old. The Nebula is 38 quadrillion miles from Earth in the constellation Serpens and is approximately 400 trillion miles at its widest point. The Eagle Nebula is so far away that when viewed from Earth, it would barely span the thickest part of the crescent Moon on the sky. In Hubble Telescope image shown below, we are zoomed in on a small part of the Eagle Nebula, highlighted in a yellow box in top most image. At 23 trillion miles in length, the leftmost pillar would stretch from the Sun to our closest stellar neighbor, Alpha Centauri.

The Pillars get their shape from a group of young, hot stars that were recently created. We can imagine that at one time the Eagle Nebula was a vast expanse of gas and dust with some regions having higher density than others. Gravity works quickly in these situations and the denser portions of the nebula begin to condense further, pulling in more of the surrounding material. Eventually, the densely packed gas ignites and a star is born. These newly formed stars blast away at the remaining gas, heating up and dissipating everything in their path.

The Hubble images are a bit deceiving, although the pillars appear to be straight up and down, they are actually angled towards the young, hot stars that are illuminating their structure. As viewed from Earth the leftmost pillar is behind the young stars and angled towards them, causing it to appear brighter than the rest of the structure. The remaining pillars are in front of the young stars and angled towards them and appear darker. At the top of each pillar resides a thicker, denser pocket of gas which shields the remaining gas from the intense stellar radiation. This is why the gas formed ‘pillars’ instead of completely dissipating.

In 1995, five years after its launch, Hubble snapped the first highly detailed image of the Pillars. Twenty years later, for Hubble’s 25th anniversary, an even more detailed picture has been released by NASA. After just 19 years, there are visible differences between the two images, revealing how quickly the gas is being blown away. According to some astronomers, the Pillars should last another 3 million years, possibly dissipating into space before the group of young, hot stars run out of fuel and explode as supernovae. There are a few astronomers that believe the Pillars have already been eradicated by a supernova explosion, the light of which has yet to reach us. Whether or not they still exist, the Pillars of Creation are being destroyed right before our very eyes, but they will not passively disappear into space. Instead, they will live on through the stars they are creating within their dense insides, leaving behind a beacon to their once impressive existence.

Follow us on social media and never miss a SWAC Feature article:

This article was co-published on the TIBBS Bioscience Blog and on Jo’s blog AstroPunkin.