A recent study found that dogs may cry “tears of joy” when reunited with their owners, but some experts are skeptical. Let’s explore both sides of the argument. 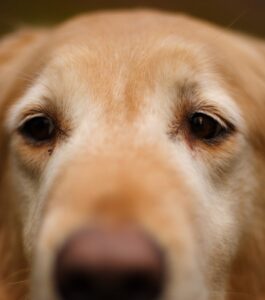 The Eyes Have It is licensed under CC BY 2.0 via Wikimedia Commons

Have you ever been so happy about something that you were moved to tears? Personally, I don’t cry very often, but I do feel a strong buildup of emotion when I think about the bond I share with my friends and family. A recent study found that dogs may also feel such a strong emotional bond with their owners, that their eyes well up with tears when they’re reunited with their owners. Some experts are skeptical about this study’s findings, explaining that the authors’ measurement of tears and emotion could be unreliable. Let’s go over the arguments for and against our canine friends’ ability to cry “tears of joy.”

The main study in question revealed multiple findings in a video summary. The researchers found that dogs that had been separated from their owners for several hours teared up more when they reunited in comparison to when the owners were already present in their familiar housing environment (with no separation). The dogs also teared up more when they were reunited with their owners compared to familiar non-owners, such as a daycare staff member. When oxytocin–a hormone that regulates social behaviors like bonding–was applied to the dogs’ eyes, the dogs teared up significantly more compared to those that received a control solution. Finally, people rated photos of dogs with artificial tears more positively than photos of dogs with no tears, suggesting that the sight of dogs with artificial tears can induce “caring emotions” in humans. The authors concluded that emotion-driven tears from dogs can influence the bond between humans and dogs.

In a previous study conducted by the same research group in 2015, it was found that “mutual gaze,” or the eye contact between dogs and their owners, increased oxytocin levels in the urine of both dogs and owners. Administering oxytocin through the nose of dogs increased the duration of gaze in female dogs, as well as urinary oxytocin levels in the owners. The authors concluded that gazing behavior increases the familial bond between humans and dogs. The results of these two studies support the notion that oxytocin could influence emotion-driven bonding and crying behavior in dogs. Now, let’s see what the skeptics have to say about this.

The New York Times received insight from multiple experts who voiced their concerns about the 2022 study. Firstly, the method that the researchers used to measure tear volume in dogs was the Schirmer tear test. In this test, a filter paper is placed in the bottom eyelid, and tear volume is measured by how far the tears travel on the paper. Dr. Clive Wynne is a behavioral scientist at Arizona State University, and his research focuses on dog behavior. He argues that if the dogs were excited to be reunited with their owners, the filter paper could rub the dogs’ eyes more and cause more tears. This could result in the greater tear volume observed in the study.

Dr. Lauren M. Bylsma, an associate professor of psychiatry at the University of Pittsburgh, also argues that administering the oxytocin and control solutions could have caused eye irritation, resulting in increased tear volume. In 2018, she co-authored a paper reviewing the theories of whether humans are the only species that can participate in emotion-based crying. Although the review paper cites many sources that have observed weeping behavior in different animals, the authors conclude that there is not enough evidence to support emotional crying as a normal behavior in animals.

Both sides of the argument provide some interesting opinions, but one point that most agreed upon was that humans exhibit more caregiving behavior toward dogs with “watery, shiny eyes.” I know I’m a sucker for puppy-dog eyes, but what do you think?

2 Replies to “Big Dogs Don’t Cry… or Do They? The Argument over Whether Our Pups Can Cry Tears of Joy”