CRISPR-Cas9, more commonly referred to as CRISPR, has been one of the hottest terms in science over the last few years. For goodness sake, Jennifer Lopez is the executive producer of the prospective NBC bio-terror drama CRISPR, which is centered around the gene-editing technique. Starting in 2012, CRISPR began its rise to becoming the newest and most promising gene-editing tool. It has since transformed the way many labs conduct research and has turned into a multi-billion dollar industry. Even though CRISPR has become more mainstream with seemingly limitless applications, recent research has shown we must move forward cautiously and be patient as this technology matures. 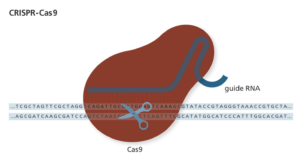 CRISPR Therapeutics currently is the largest biotechnology company that specializes in gene editing via CRISPR. After initially opening at $15 per share on October 19, 2016, CRISPR Therapeutics climbed to $74 per share and had a market cap of $3.47 billion on May 30, 2018. The company’s surge was in response to their announcement in April 2018 that they were moving forward with an Investigational New Drug (IND) application with their partner Vertex Pharmaceuticals Inc. The two companies also had plans to start a Phase 1/2 clinical trial to treat adults with sickle cell disease using CRISPR gene-editing technology in both the United States and Europe. On May 30, 2018, CRISPR Therapeutics announced that the FDA put a clinical hold on its IND application pending the resolution of certain questions by the FDA. The announcement offers no insight into the questions or concerns of the FDA, but this news was enough to spook investors. CRISPR Therapeutics’ stock fell 20.2% in June and 19.1% in July. Currently, it is trading about $48 per share and its market cap is valued at $2.295 billion.

Only part of the CRISPR Therapeutics decline can be attributed to the FDA’s announcement. Three separate studies published this summer negatively influenced investors outlook on CRISPR Therapeutics, as well as the two other major biotechs specializing in CRISPR, Editas Medicine and Intellia Therapeutics. The first study, which was published June 11 in Nature Medicine, highlights how double stranded breaks in DNA caused by Cas9, the molecular scissors of the CRISPR-Cas9 system, are toxic to human pluripotent stem cells (hPSCs). hPSCs, cell lines similar to an early embryo that are capable of differentiating into other cell types, depend on the tumor suppressor protein p53 for its toxic response to prevent growth of aberrant cells. Given that p53 mutations are prevalent in hPSCS, there is also a concern that hPSCs engineered using CRISPR-Cas9 could cause cancer. A second study, published in the same issue of Nature Medicine on June 11, used human retinal pigment epithelial cells and reached a conclusion similar to the previous study, CRISPR-Cas9 induces a p53-dependent DNA damage response. In addition, this group also found CRISPR-Cas9 causes cell cycle arrest. Both studies clearly indicate that it is crucial to monitor p53 function when developing cell-based therapies using CRISPR-Cas9.

A third study, published July 16 in Nature Biotechnology, further casts a cloud of uncertainty over CRISPR. This study revealed that CRISPR-Cas9 causes “significant on-target mutagenesis, such as large deletions and more complex genomic rearrangements at the targeted sites in mouse embryonic stem cells, mouse hematopoietic progenitor and a human differentiated cell line.” Even though these three articles were all released in the last two months and were the primary reason investors in CRISPR-based companies have been more reluctant to invest, two other studies also show negative effects of CRISPR. One shows an adaptive immune response to Cas9 and the other shows major genomic rearrangements from in a mouse model following the use of CRISPR-Cas9 also show negative effects of CRISPR.

Even though it has been a disappointing summer for companies specializing in CRISPR, CRISPR Therapeutics, Editas Medicine, and Intellia Therapeutics remain adamant that the future looks bright. For many people, these studies might be more a speed bump rather than a road block.