The Galapagos Islands are home to a wide variety of unique animals, many of which are critically endangered.

As if there wasn’t enough craziness in the world, someone just tried to smuggle nearly 200 baby tortoises out of the Galapagos Islands. The 200 baby tortoises were wrapped in plastic and stuffed into a suitcase and they were being smuggled to Guayaquil, the port city of Ecuador. Tortoises have been hunted since the 17th century for food and oil, and today, a single Galapagos tortoise can be sold for up to $5,000. When the Galapagos Islands were discovered, nearly 15 different subspecies of tortoises inhabited the islands; but now, only 10 subspecies remain, despite the efforts of the Ecuadorian government, which has protected the tortoises since 1970. In fact, the Galapagos Islands are named for the tortoises: galápago is one word for tortoise in Spanish. 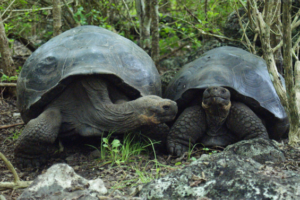 Each of the larger islands in the Galapagos has a different subspecies of tortoise that is adapted to thrive in that particular island’s environment. One of the major differences between island subspecies is the shape of the tortoises. Galapagos tortoises have two types of shapes: saddle-backed or dome-shaped. Saddle-backed tortoise shells are lifted upwards at the front of the shell, like a saddle. This shape facilitates feeding from cactus trees, by allowing  tortoises to lift their heads up. Dome-shaped tortoise shells are shaped like an oval dome – lower at the front, back and sides and tallest in the center. This dome shape is better for tortoises that feed on vegetation close to the ground because they don’t need to lift their heads up. Astonishingly, Galapagos tortoises can go almost a full year without food or water, because they store water in their bladders. For the Galapagos tortoises, water storage is an extremely advantageous adaptation in a climate where seasonal changes and the ENSO system can cause periodic droughts and food shortages.

The ENSO system, or El Niño (and La Niña) Southern Oscillation system, refers to an atmospheric weather pattern in the Pacific Ocean, which causes wind patterns, ocean temperatures and rainfall to fluctuate. Under normal conditions, trade winds move warm surface waters along the South American coast offshore, resulting in a process called upwelling in the Galapagos waters. Upwelling brings deep, cold ocean waters full of nutrients to the surface (to replace the warm water moved offshore), fueling the development of productive oceanic regions with plenty of food. During El Niño events, the direction of the winds reverses, and there is no upwelling, meaning no nutrients or phytoplankton, depleting marine food resources. La Niña events refer to when the normal conditions, winds blowing east to west across the Pacific, become more extreme. La Niña events increase upwelling, but can result in long periods of drought – hence the tortoises’ need for water storage. 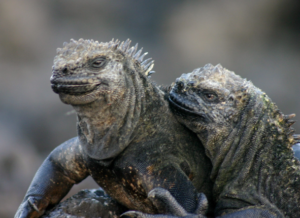 Marine iguanas are another Galapagos reptile adequately adapted to face the threats posed by the ENSO system. Interestingly, marine iguanas can shrink their skeletons. The snout-to-vent length of the iguanas, or the length from the tip of their nose to the start of their tail, was found to decrease by almost 20% over a two year period, coinciding with El Niño conditions. Marine iguanas feed on algae underwater, scraping it off rocks with their teeth, and when El Niño conditions arise, this food source is depleted, due to the lack of nutrients in the water. Studies have found that iguanas that shrink more during these times actually have greater survival in the long term, making skeleton shrinkage extremely adaptive in the Galapagos climate. 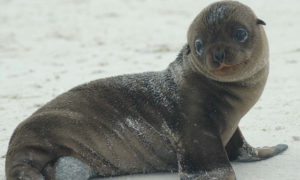 The Galapagos fur seals however, do not fare quite as well during El Niño events. The fur seals feed on the cephalopods and fishes brought to the surface by the upwelling. Without upwelling, as in during an El Niño event, these animals face diminished food resources. This can lead to starvation and huge population losses. This population loss rises above the large scale population reduction that occurred in the 20th century, when traders hunted Galapagos fur seals to the brink of extinction for their incredibly soft fur.

Ever since Darwin’s famous voyage to the Galapagos Islands on the HMS Beagle, from which the very theory of evolution was established, the Galapagos have been considered one of the most important places to study evolution and natural selection. The Galapagos contains many unique species that are endemic to the islands, and each is perfectly adapted for the particular island environment they inhabit. There are, of course, the giant tortoise, the marine iguana and the fur seals, as well as the Galapagos penguins (the only species of penguin in the northern hemisphere!), Darwin’s finches, and the blue footed boobies that are famous for their special mating dance! Almost all of the animals inhabiting the Galapagos are listed as vulnerable or endangered by the IUCN, which is why the smuggling of these animals is such a tragedy.

As a biologist, the Galapagos have long been on my list of places to visit, and I don’t know about you, but I think I’ll be celebrating the (hopefully soon) end of the pandemic by booking a plane ticket or two!

One Reply to “Pack your bags, we’re going to the Galapagos”