Non-scientist friends and relatives often ask me whether I am “curing” cancer, and question why the cure for cancer doesn’t already exist following decades of funding for research. Worse, some social media conspiracy theorists are irrevocably convinced that the cure for cancer already exists, but, for monetary gain, the government only allows companies to treat patients with subpar chemotherapeutics that will only  prolong the disease, not cure it. When faced with such conversations, which are usually a testament to the poor public science education in this country, I tell people about the complex nature of cancer and the difficulty of cancer drug development. I try to explain that cancer is different in every person. I discuss the heterogeneous nature of tumors, and how different sections of a single tumor are genetically distinct from one another. I explain that it is incredibly difficult to identify a therapeutic window where a compound can selectively target and kill tumor cells and not healthy cells, because tumor cells are just corrupted versions of your own healthy cells. I even quote my graduate research mentor, Dr. Channing J. Der and say, “Cancer drug design is not for the faint of heart.” Then, I usually tell people the story of the RAS proteins.

Over thirty years ago, the RAS proteins were implicated as oncogenes, which are genes that have the potential to lead to cancer when not properly regulated. Today, we know that activating mutations in the three RAS isoforms, N-RAS, H-RAS, and K-RAS, are present in nearly one-third of all human cancers. Additionally, these mutations actively drive some of the most aggressive and deadly tumor types, including lung, colon, skin, and pancreatic cancer. These discoveries sparked decades of unfruitful efforts to design inhibitors of RAS as a means to selectively target and eliminate tumor cells that are dependent upon RAS signaling for growth and survival, while avoiding damage to normal cells. After three decades, and an unthinkable amount of money and effort, no pharmaceutical company or academic institution has been successful in targeting RAS proteins with any clinical efficacy. 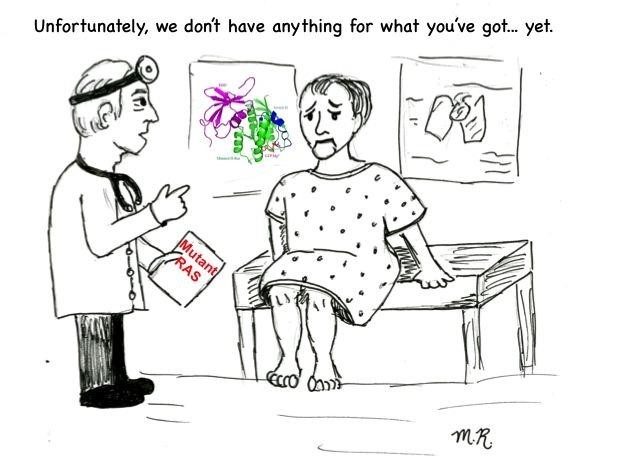 Why is it so difficult to design a drug for RAS? Well, RAS proteins are small GTPases that cycle between an “on” state when bound to a small intracellular molecule called GTP, and an “off” state when GTP is hydrolyzed to GDP. When RAS is “on”, it is communicating with a multitude of downstream proteins that drive cellular proliferation and survival – two key functions that are necessary for normal cell growth, but must be tightly regulated. However, when RAS is mutated, it is chronically bound to GTP and in the “on” state.  This hyperactive mutant RAS signaling promotes tumor initiation and maintenance, and it allows these corrupted cells to continue proliferating under conditions of DNA damage and metabolic stress. Researchers have attempted to design small molecules that disrupt GTP binding and inhibit activation of RAS, but because the affinity of RAS for GTP is so strong, so far, it has been impossible to generate a compound that can inhibit GTP-binding and RAS signaling.

To circumvent the issue of targeting RAS directly, many other approaches have been attempted to inhibit RAS signaling. These alternative approaches began with the creation of farnesyl transferase inhibitors, which were meant to prevent RAS proteins from receiving a crucial lipid tail during post-translational processing that allows RAS to interact with the plasma membrane where most RAS signaling events take place. Additionally, scientists generated inhibitors of validated downstream RAS effectors, such as the kinases MEK, ERK, PI3K, and AKT in an attempt to disrupt RAS signaling. Many labs initiated large screens to search for synthetic lethal partners of RAS, which are other proteins that work in conjunction with mutant RAS to promote cancer cell survival.  These approaches have had little clinical success, which is due in part to an incomplete understanding of RAS function and RAS signaling.

So should we give up on RAS? The laboratory of Dr. Kevan Shokat at the University of California San Francisco has produced a promising new compound that can selectively target a K-RAS mutant with a glycine to cysteine substitution at amino acid 12, which is found in a subset of cancer patients. Others continue similar work, such as Dr. Steven Fesik at Vanderbilt University in Nashville, who is taking a structure based, rational drug design approach. The hope is that by probing the surface of the RAS proteins, which are notably lacking in convenient pockets for potential inhibitors to bind, researchers will be able to tweak existing compounds, or create new ones, that will bind to RAS and disrupt RAS signaling. So all hope is not lost, as these approaches represent some progress; however, our effort to further understand and target mutant RAS is far from over.

While the current anti-cancer drug discovery effort has largely focused on protein kinase inhibitors, the arrival of cancer genome sequencing initiatives has made it painfully evident that RAS is still the major driver of our major cancer killers. To reinvigorate the anti-RAS effort, the National Cancer Institute has begun the RAS Initiative. This megaproject seeks to facilitate the collaboration of the NCI Frederick National Laboratory for Cancer Research in Frederick, MD (aka “the hub”) with researchers all over the world (aka “the spokes”) to extend the knowledge base surrounding RAS proteins in cancer and to strategize methods for targeting these proteins. The aims of this endeavor are to determine the structure of all known oncogenic RAS mutants and the preferential downstream signaling pathways of different RAS mutants, compile genetic data on mutant K-RAS cell lines, design compounds to bind to and inhibit RAS, and lastly, to determine whether there are any cell surface markers unique to mutant RAS tumor cells that can be exploited to target and kill tumor cells.

In the words of local UNC RAS expert, Channing J. Der, “The history of anti-RAS drug discovery has been marked by missteps and mistakes, due in large part to our incomplete understanding of the full complexities of RAS. Sun Tzu, a Chinese military general, strategist, and philosopher, wrote The Art of War, an influential book on military strategy.  In it, he stated, ‘if you do not know your enemies nor yourself, you will be imperiled in every single battle.’  This quote captures the essence of our war on RAS, where we once thought we fully understood all the complexities of RAS and went to battle and lost because of this ignorance.”

The hope is the RAS Initiative will push the field to better understand our enemy, mutant RAS. We aim to drug the previously perceived “undruggable” mutant RAS once and for all. Generating a RAS inhibitor would be a giant leap for the drug discovery process, and this megaproject represents exactly what science is supposed to be about: pooling resources and working together to find a solution for a difficult problem such that society may benefit.

Now that you know more about the complexity of cancer, RAS proteins, and mutant RAS, aid the enhancement of public science education by sharing with others and visiting the following links for even more information.

To read more about the NCI RAS Initiative, please visit:

To read more about RAS proteins and the long history of attempts to therapeutically target them:

Follow us on social media and never miss a Science News story: