A recent study found that some tea bags may release billions of microplastics into your tea. This revelation comes at a time that scientists are growing increasingly concerned about the prevalence and potential health effects of microplastics. 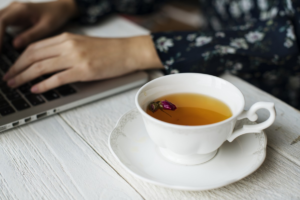 A cup of tea can be a great way to soothe both your body and mind, whether it’s to gear up for the day ahead or to calm down for a relaxing night… but what if that act of self care is doing more harm than good? Despite a growing public concern for the environment and a push to reduce plastic use, a number of tea companies are swapping out their paper tea bags for plastic ones. A recent study found that a calming cup of tea could actually be chock full of microplastics, harming both your body and the environment. Nathalie Tufenkji and her colleagues at McGill University recently published an article in the Journal of Environmental Science and Technology, detailing a study they conducted on the effects of plastic tea bags. 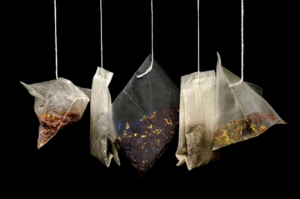 Over time, plastic breaks down into tiny particles called microplastics and even smaller nanoplastics. For reference, nanoplastics are less than 100 nm in diameter, while a human hair is about 75,000 nm in diameter. In the researchers’ study, they took four commercial plastic tea bags (brands were not disclosed), emptied them of their tea leaves, and heated them in boiling water. About 11.6 billion microplastics and 3.1 billion nanoplastic particles were detected per tea bag with electron microscopy — a high resolution imaging technique that is commonly used in biology.

Scientists have been finding an increasing amount of microplastics in our food, drinking water, and air. A study earlier this year found that the average person is ingesting about 5 grams of plastic per week, approximately equal to the weight of a credit card. However, the potential health effects of ingesting these particles are still unknown. In the tea bag study, Daphnia magna, or water fleas, were treated with the microplastics from the tea bags and all survived. Although some of the aquatic organisms exhibited anatomical or behavioral abnormalities, more research is needed to discern whether these particles are harmful to humans. A report from the World Health Organization (WHO) earlier this year was the first international study that looked into the effects of microplastics in drinking water on human health. Although the report detailed that microplastics could be harmful to humans because of the plastics themselves, the chemicals they contain, or microorganisms that could be on them, the WHO concluded that there was no apparent immediate risk, but that they couldn’t rule out future risks. In other words, they don’t know either.

Concerned about single use plastic or the health effects of microplastics? Start by enjoying your cup of tea with these plastic-free tea bags from now on!