As of February 18, 2022 the Mars Perseverance Rover has spent exactly one Earth year on Mars (although it’ll be another 322 days before it’s been a full Martian year). So what has “Percy” been up to this year? 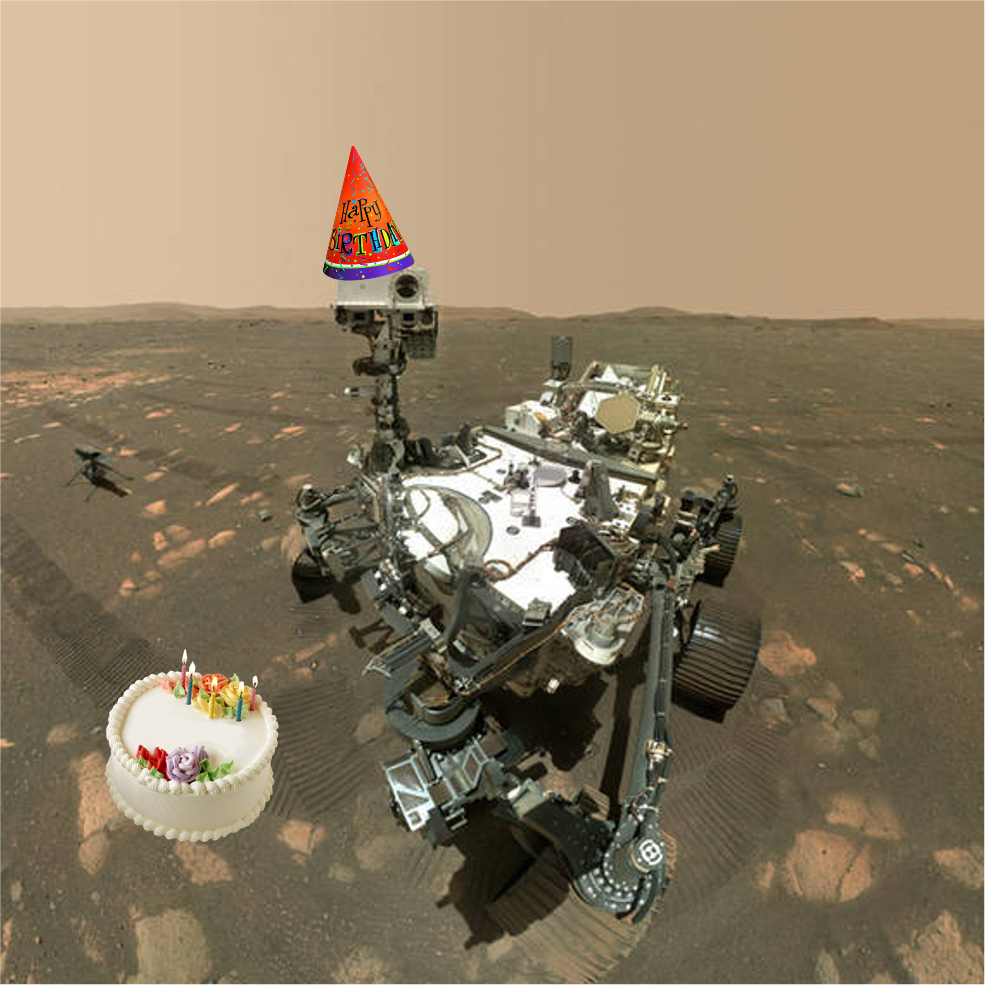 The Perseverance rover is NASA’s 5th rover to the red planet and is part of the Mars 2020 mission. The goal of the project is to “Seek signs of ancient life and collect samples of rock and regolith (broken rock and soil) for possible return to Earth.”  To that end Perseverance is covered with scientific instruments, including 19 cameras, specially designed for navigation, panoramic photography, identifying minerals and more. Percy also has a weather station for studying Martian weather, a radar imager to look underground, and the MOXIE experiment, which is a first step towards generating oxygen from the unbreathable Martian atmosphere. But possibly the most exciting instrument object onboard Perseverance is Ingenuity — a.k.a “Ginny” — a small helicopter drone, built to test powered, controlled flight on Mars — something that has never been done before!

With all those instruments on board, what have we accomplished in the past year? On February 18, 2021 Perseverance landed in the Jezero Crater — an ancient river delta — on Mars. Since then the rover has driven a little less than three miles, exploring the base of the crater. On February 14, 2022 Perseverance set a new record for furthest distance traveled by a Martian rover in one day – a whopping 1050 ft – navigating fully using its AutoNav self-driving system! This technology allows rovers to chart their own paths around rocks and other obstacles in their route, instead of having a team of engineers stationed on Earth do the driving, letting them travel faster and further than before.

Perseverance has collected 6 rock samples from the Martian surface, which are analyzed on board and will be brought back to Earth – another first! These rocks will help scientists revise estimates of Mars’s age, and prior geological activity, and may even provide evidence as to whether tiny microbes once lived on Mars.

And Perseverance isn’t the only one making big marks on Mars. Not only did Ingenuity complete the first ever powered, controlled flight on another planet, it has made a total of 19 flights, covering almost 2 miles in distance, and long outliving it’s 30-day test run.

Just one year into the Mars 2020 mission Perseverance and Ingenuity have already set many Martian records, and collected a lot of data (and rocks) about Mars. I can’t wait to see what comes of the rest of the mission!