Ever wonder why Azula’s flames are blue? Read my detailed explanation that was inspired by scientifically inaccurate assignments of flame colors.

While perusing the recent outburst of Avatar: The Last Airbender memes and discussions, I came across speculations surrounding the meaning of one of the character’s blue flames. From a literary standpoint, they could be attached to the character’s coldness or unique talent, but what about from a scientific perspective? The nature of fire has plagued human curiosity for millennia.  Scientists during the Age of Enlightenment still clung to a pseudo-theory from the ancient Greeks to explain fire, phlogiston. Rather than a rapid combination of fuel and oxygen, they believed that flammable materials had some gaseous component called phlogiston that was released into the air upon burning, and flames were quenched when the air was saturated with this phlogiston. You can read more about that in another piece I wrote or in Steven Johnson’s book The Invention of Air (link is a summary and discussion of this piece).

What actually causes fire, and what causes the coloration of fire in general? Fire is a hot stream of gases (and potentially particulates) that result from the extreme heat released from electron-rich (usually carbon) based materials giving up their electrons to the oxygen that surrounds us. This is often depicted by the flame triangle which needs to be balanced for complete combustion to occur. 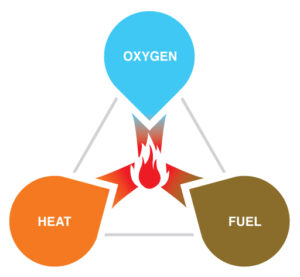 Depending on the material, combustion can be instantaneous at room temperature (see tertiary butyl lithium video here) or require a spark to surpass the energy barrier needed to kick off the burn like with grass and wood. The colors come from a combination of something called luminescence and black body radiation. Luminescence results when elements or molecules with excited electrons release energy in the form of light. Light or heat moves the electrons from a low energy resting state to higher energy levels, and an empty space remains for the electron to return to. This return from high to low energy electron levels produces a photon, the particle that carries light around the universe. Luminescence in fire can be seen in the classic demonstration of how different metal salts change the color of fire: copper making green, lithium glowing lavender, calcium shining red. Another way color is produced in fire is black body radiation, a form of radiation emitted by any heated object, and the higher the temperature of the object, the higher energy this radiation. In the visible spectrum, higher energy light moves from red to blue on the color spectrum. Black body radiation can be seen in blacksmithing, where metals are heated to red hot. Black body radiation is broad in color, which is why we see red hot metal going to white as it is heated further before blue. At cooler temperatures, only the red edge of the visible spectrum is visible, and as the metal heats, more colors are included in the shining metal’s radiation. The diagram below represents this concept, where the hottest curve includes the full rainbow of color. 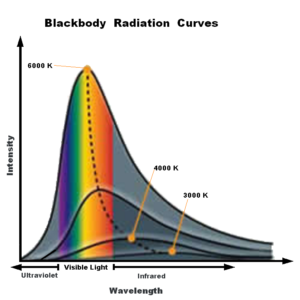 So why are some flames orange and others blue? Orange flames result outside of the primary combustion zone that is the bottom of a candle fire, where the fuel and oxygen are not meeting and reacting in a balanced combustion reaction, usually because there is less fuel available.  In this unbalanced reaction, the unreacted carbon particulates serve as black bodies to emit the light from the hot gasses surrounding them. Blue flame occurs in the primary combustion zone, where there is plenty of fuel. The flames of a Bunsen burner are all blue because well-oxygenated fuel is mixed prior to combustion. The blue flames are thought to be the result of luminescence from the molecule dicarbon visible only when complete combustion removes other particles that could produce the typical orange of the flame’s outer cones. Dicarbon is unstable in our atmosphere and so quickly reacts with other molecules in the air to disappear. It is more common in space, where a variety of unstable molecules can exist because of the near-vacuum and low energy in many locations. In fact, it has only recently been synthesized in a lab.

With carbon-based fuels, we know that the blue comes from balanced combustion making dicarbon, but an even more powerful fire bender would combust hydrogen, rather than carbon-based fuels. Hydrogen, when very pure and free of particulates, burns invisibly with very high heat. This remains a concern in the safe handling of hydrogen for energy consumption, as noted in the book The Hype about Hydrogen by Joseph Romm, which details the necessary steps towards a hydrogen economy. In the event of a hydrogen fire, responders would have to exhibit extreme caution, for example by wearing infrared goggles,  or risk walking into burning streams of hydrogen. Hydrogen flames are a  fun thought experiment for a fantasy world’s characters but a very deadly reality. As with most realities, flames represent a culmination of phenomena that were difficult to explain before the scientific fields evolved to the modern age, and even explained, mastered flames still delight and dazzle the human imagination.