Who hasn’t heard that dog is man’s best friend? One of my best buddies is my dog Frisco, who is shown in this picture. What you can see are our deep stares into each other’s eyes. What you can’t see is what is going on chemically. Oxytocin, often known as the ‘love hormone’, is a peptide that is strongly implicated in many important social and nurturing behaviors. Most notably it is present between mothers and their infants. Moreover, this same chemical could explain our affiliation towards other species. For example, it has been shown that playing with dogs increases oxytocin levels in their owners. Clearly, there is a biological drive behind our fondness for our canine friends. Is this feeling chemically reciprocated? 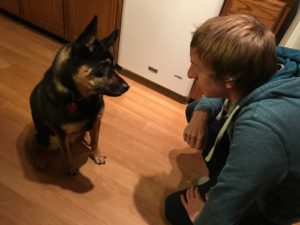 Nagasawa et al. sought to answer this question and delve deeper into the unique kinship between dogs and humans. Experimenters first set up sessions in which owners were free to gaze at, touch, and talk to their dogs. Oxytocin levels were monitored before and after these sessions for both species. Interestingly, in sessions with a high amount of dog-owner gazing, oxytocin levels increased not only in human owners but in dogs as well! To test the specificity of this connection, ‘gazing’ behavior and oxytocin levels were also monitored in human-raised wolves and their owners. In contrast to our furry friends, wolves rarely gazed at their owners and oxytocin levels remained relatively unchanged. Despite the strong genetic similarity between wolves and dogs, they do not exhibit the same chemical excretions when exposed to humans. These results suggest the domestication of dogs may have influenced their evolutionary development, particularly with respect to gaze communication and oxytocin-mediated interspecies bonding.

Researchers also found that the chemical and behavioral reciprocity between humans and dogs could be hijacked. Nasal oxytocin administration increased the duration of dog’s gazing at owners in female (but not male) dogs, which correspondingly led to an increased oxytocin levels in both species. Fascinatingly, oxytocin administration did not increase urinary oxytocin levels in dogs when interaction with their owners was limited.  This suggests that mutual oxytocin secretion is crucial for the affiliation between dogs and humans.

Any dog owner is no stranger to the strong protective feelings we feel for our pooches. Indeed, the same chemical that facilitates mother-infant bonding is elevated in humans during interactions with their dogs. These results suggest that this feeling is chemically reciprocated, giving a heartwarming and scientific backbone to the maxim that dogs are truly man’s best friend.