The science behind the mysterious and coveted ghost orchid. 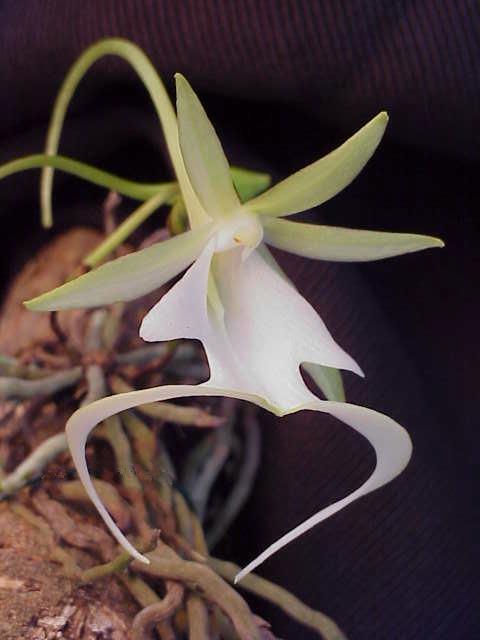 As days grow shorter and nights grow colder, the season of ghosts and ghouls becomes ever present. But, there is one ghost that haunts the tropics of the Southeastern United States and Cuba year round.

Deep within the humid belly of the Florida Everglades and perched above a murky alligator-laden lagoon, rests a rather plain-looking tangle of white-ish green vines on the base of a tree. This seemingly unnoteworthy bundle of plant matter is miniscule compared to the craggy, mighty trunk of the towering cypress tree it clings to. Yet, this little botanical tangle is one of the world’s most mysterious and coveted orchids.

Dendrophylax lindenii, otherwise known as the “ghost orchid,” can be found in Cuba and Southern Florida. It gained much of its notoriety after the publication of Susan Orlean’s nonfiction book, The Orchid Thief, in 1998. The American journalist detailed the trials and tribulations of John Laroche, or “The Crazy White Man”, as he was known by Florida’s Seminole Tribe. Laroche was a horticulturist who was determined to obtain and reproduce the endangered ghost orchid for monetary gain. It is estimated that there are only about 2,000 ghost orchids in the wild, and one of the only places you can see one in its natural habitat is in Florida’s Corkscrew Swamp Sanctuary, the oldest bald cypress forest in the United States.

The ghost orchid gets its name because it spends the majority of its life as merely a bundle of roots. Just roots. It doesn’t have a stem or even leaves. It tends to look more like forgotten debris than a fully functional plant. But during a small window between May-August, the ghost orchid will bloom 1-2 delicate and breathtakingly unique white flowers with petals that drip into long spiraling tendrils.

How does a plant with no stem or leaves survive? The “trick” to the ghost orchid’s “treat” lies in its roots. The ghost orchid is an epiphyte, a term that also describes roughly 73% of all species in the Orchidaceae family. Epiphytes are plants that can live without soil and they are often found anchored on larger plants, like the trunks and branches of trees. The roots of epiphytic orchids have a unique spongy outer coating called the velamen radicum. The velamen radicum is typically multilayered and structurally very similar to skin. Not unlike how the epidermis is coated in a layer of dead keratinocytes that protect and waterproof our own skin, the outermost layer of an orchid’s root is composed of compact, lignified dead cells to help protect the root within and seal in moisture.

Orchids can thrive in hostile and unpredictable environments. Seventy-five percent of the yearly rainfall in Southeast Florida falls during the 6-month long wet season. Most plants store their water in their stems and leaves. Since the ghost orchid has neither of those structures, it requires an environment with high humidity. This also makes it critically important for the ghost orchid’s roots to be fine-tuned to rainfall and ambient moisture. The velamen of an orchid’s roots can become almost completely saturated in as little as 15 seconds. In contrast to how quickly the velamen can uptake water, it can take hours before it dries out again. The velamen acts as a temporary water storage system, maximizing the time the orchid can absorb water and nutrients.

The speed with which velamen uptakes moisture can even be seen with the naked eye. When orchid roots are dry, the white-ish gray velamen can be seen; however, when roots are wet, the velamen absorbs the water and becomes translucent, revealing the inner layer of green cortical cells.

Akin to other green structures in plants, orchids’ cortical root cells contain chloroplasts and can therefore photosynthesize. This is one of the crowning achievements of the ghost orchid. A typical plant relies predominantly on its leaves to generate energy, but the ghost orchid’s specialized roots are multipurpose and can serve as both leaves and roots. The root velamen traps moisture and nutrients for storage and the inner cortical cells turn those resources into usable sugars – all within the same physical structure.

The other component to the ghost orchid’s ability to streak leaf-less and stem-less through the jungle is the work of another organism. The ghost orchid is dependent on a symbiotic relationship with a fungus. This mycorrhizal relationship allows the orchid to obtain critical sugars it needs to survive from the fungus while the fungus receives extra moisture and readily accessible organic matter as the roots naturally turnover. Relationships between fungi and orchids are not new, and many orchid species (including the ghost orchid) require fungi to successfully reproduce and germinate. Orchids are even the only higher plant family to consistently utilize fungus as an alternative food source.

Even outside of the harsh swamplands, the ghost orchid cannot be cultivated without its fungal companion, and while the exact identity of this loyal microbe remains elusive, the fungus has been narrowed down to the Ceratobasidium family. There is a deep-rooted biological bond between orchid and fungus.

The ghost orchid rebels against nature’s standards with its unique root system and pragmatic relationship with fungus. This enchanting phantom has captivated humanity for decades, and beyond its specter-like beauty, it is truly a marvel of the natural world.