Ever since the invention of plastic, disposal of the billions of pieces produced each year has been a global problem. Scientists have uncovered two bacterial enzymes that eat plastic – could this be the answer we’re looking for?

You’ve heard it before: the world is drowning in plastic.

Mass plastic production began in the 1940s, although the invention of synthetic polymers, which plastics are made of, occurred in 1869. Polymers, or substances that are made up of many repeating units, can be both natural – like the cellulose that makes up plant cell walls – or synthetic – like plastic. The number and pattern of the repeating units contributes to the strength, weight, and flexibility of the polymer.

There are many different types of synthetic polymers, but the most commonly used for food containers, beverage bottles, and clothing fibers is a type of polymer called polyethylene terephthalate, or PET. This is what we commonly refer to as “plastic” for bottles and containers, or “polyester” for clothes. The great thing about plastic, of course, is that it seemingly lasts forever. But this is also plastic’s biggest downfall. 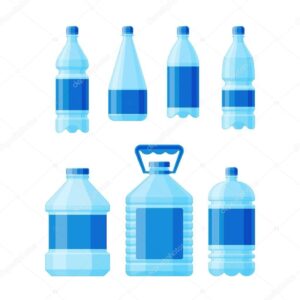 While the everyday convenience of plastic is a pro for us, its long-term effects on the environment (and our health) are definitely cons. The problem is that plastic doesn’t break down like organic material does. Wood, grass, and food are all biodegradable, meaning that the bacteria in soil will break those materials down. Plastic, on the other hand… not so much. Because microbes either can’t break plastic down or do so extremely slowly, UV rays from the sun have to do the job, which can take hundreds of years.

Although PET is infinitely recyclable, not everyone takes advantage of this process. Because we ultimately end up producing more plastic than we reuse, the result is an over-accumulation of plastic (which we already know takes an extremely long time to break down). In fact, over 360 million tons of plastic are being produced and discarded each year.

All this extra plastic laying around is harmful to wildlife and the environment. Wildlife ingest tiny pieces of plastic and can get tangled in garbage, endangering their lives. As plastics that are buried in huge landfills slowly decompose, harmful chemicals are released into groundwater, on which nearly 40% of Americans rely for drinking. The production of plastic also relies on the use of fossil fuels, which are a non-renewable and harmful source of energy, contributing to global warming. 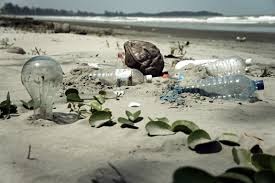 So – what can do we do to reduce our production and thus the accumulation of this incredibly durable discarded plastic?

Besides recycling to reuse plastics or using slightly more biodegradable plastics, scientists have recently created a “super enzyme” that breaks down the long polymers of plastic. This super enzyme is a combination of two different enzymes: PETase and MHETase. These two enzymes, which are isolated from the bacterial species Ideonella sakaiensis, were first identified in Japan in 2016. Although the degradation abilities of the enzymes were understood, it wasn’t until recently that scientists were able to manipulate the two to work together to digest plastic 3 times faster than either enzyme alone.

The concept is simple: by combining PETase and MHETase to break down plastics, the recycling of plastic can be faster and pollution produced by plastic will be reduced. The implications of this technology are widespread, although the research is still in its infancy. The researchers are currently working on using this system on a larger scale, where it can be applicable in every corner of the world. The global environmental crisis caused by plastics pollution is an imminent problem we must address. While we may still be a few steps behind the global use of this two enzyme system, scientists are continuously making improvements everyday, bringing us closer to the possibility of a plastic-free world.