A spotlight on Lilian Vaughan Morgan, who was more than just the wife of Thomas Hunt Morgan. 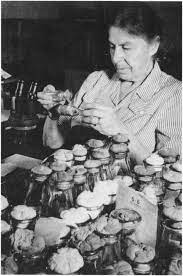 Thomas Hunt Morgan received many awards during his lifetime. This isn’t particularly surprising as he was a widely-known American geneticist whose work with fruit flies in the early 20th century was seminal to the field of genetics. His research led to a deeper understanding of the chromosomal theory of inheritance, which states that genetic inheritance can be explained by the presence of genes at specific locations on chromosomes and the actions of these chromosomes during cell division, and earned him many awards, from the Darwin Medal in 1924, to the Nobel Prize in Physiology in 1933. The Genetics Society of America has even named an annually awarded medal after him. While all the recognition he has received is well-earned, a little known fact is that he is not the only Morgan to have contributed significantly to the world of genetics: his wife Lilian Morgan is also deserving of considerable acclaim.

Lilian Vaughan Morgan, née Sampson, was born in Maine in 1870 and orphaned at the age of four when her parents died of tuberculosis. She was raised by her maternal grandparents, who later allowed her to study biology at Bryn Mawr on the condition that she would come home every weekend, which she dutifully did. After graduation, she conducted research at the University of Zurich and the Marine Biological Laboratory in Massachusetts. She then went on to get a Master’s degree with Thomas Hunt Morgan – ten years before she was married to him. Although Lilian Morgan’s research career began in natural history and embryology, she shifted her focus to genetics in the early twentieth century, publishing 16 single author papers despite taking a 16-year break to raise their four children. Her impact on the field is immense.

One of her most prominent contributions to the field of genetics was the discovery of the attached-X chromosome, a structure in which both X chromosomes are fused together. During her time in Dr. Morgan’s lab, she happened upon an unusual female fly that had different phenotypic characteristics in its anterior and posterior parts. Upon crossing this fly out to a male fly, as well as the female progeny of this first mating to more males, she was able to deduce that the X chromosomes in these flies were physically connected and being inherited as a unit. This discovery of the attached-X chromosome not only confirmed a previous theory of how sex determination occurs in fruit flies, but also further supported the chromosomal theory of inheritance. In addition, it was used by other scientists in their studies of when crossing-over – the exchange of DNA between maternal and paternal chromosomes – happens during meiosis. Besides the compound X chromosome, Mrs. Morgan also discovered ring chromosomes, with her 1933 paper on them being her most highly cited work to date.

While her contributions to the field of genetics are huge, it is hard to say that the field returned the favor. When Mrs. Morgan went back to research after her children were grown, she was not given an official appointment at Columbia, but only some working space in her husband’s lab. Further, it has been rumoured that Dr. Morgan was not very comfortable with her presence in his lab and that she “bent over backwards to be unobtrusive”. Although ready to discuss her research with anyone who took an interest, she did not have her own professional circle and was not given access to the inner circle her husband had with his graduate students. She never attended a conference, or presented her own work. Her first and only official appointment was as a CalTech Research Associate, a year after her husband had died.

What is especially striking about Mrs. Morgan’s story is that despite being a white woman married to one of the leading scientists in the field, giving her access that most other women of her time would never have had, Lilian Morgan’s work, efforts, and intelligence were never officially recognized, let alone celebrated. Although in many parts of the world science is no longer as exclusionary as in Lilian Morgan’s time, biases are still widespread. While she deserves a lot more recognition than I am able to provide her through this article, I hope it will be a step towards shedding light on the many achievements of those who have been previously overlooked.

One Reply to “Lilian V Morgan: A Spotlight”