Bats and other animals possess an ability that humans have harnessed with technology: echolocation. Echolocation uses the echoes of sound waves to create an image that the animal uses to navigate and hunt.

Now that summer has arrived, the days will become hotter and daylight will last longer into the evening. During these extended hours of dusk, you’ll see fireflies start to flash in the dark. If you look up, you might identify bats by their erratic flight patterns as they hunt for mosquitos and other insects.

Have you ever wondered how bats find their food? How they do so is particularly interesting since bats must navigate in near or total darkness. To safely navigate and hunt in the dark, bats use echolocation. Echolocation is the use of sound waves and their reflected echoes to identify where objects are in space.

Humans have developed analogous technology called sonar, which is short for sound navigation and ranging. Humans use sonar for underwater applications such as mapping the sea floor, navigating waters safely, and identifying underwater objects such as shipwrecks or submarines. Bats, however, already possess biological sonar: echolocation!

There are over 900 species of bats in the world, and it is estimated that about 70% of bat species use echolocation.  So, how does echolocation work? The bat emits sound waves from its nose or mouth and when the sound waves hit an object, an echo is produced. This echo is reflected back to the bat’s ears. The bat can then interpret the echoes to determine the size, location, and shape of the object. By constantly sending out these sound waves, the bat can quickly alter its course to intercept its prey. 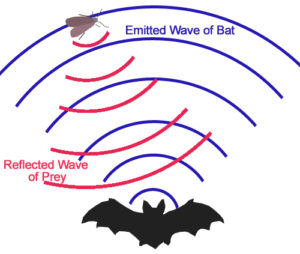 The sounds that bats make for echolocation are usually ultrasonic, meaning that they are so high pitched that humans typically can’t hear them. Bat echolocation sounds range from 9 kilohertz (kHz) to 200 kHz, while humans only hear sounds between 20 Hertz to 15-20 kHz. Both the different frequencies of the sound waves the bat emits and the echoes the bat receives provide information such as speed, direction, size, and position of the object hit by the waves. To interpret the information from the echoes, bats have specialized ears, muscles, and cells. External ear structure aids in receiving the echoes, and specialized ear muscles prevent internal damage from occurring when a bat listens to its own call. Specialized receptor cells provide the bat with extreme sensitivity to determine even the slightest changes in frequency. These changes in frequency create an image in the brain and allow the bat to make rapid adjustments to its speed and course in order to catch its prey or avoid an object.

However, bats aren’t the only animals who use echolocation. Oilbirds are a nocturnal bird species that also uses echolocation to find food and navigate in the dark. Shrews also use echolocation for the more basic purposes of simple spatial orientation and habitat investigation. Underwater, visibility is limited in the ocean since significant amounts of sunlight only penetrate a mere 200 meters. Dolphins, porpoises, and whales need to be able to find food, locate each other, and avoid predators, and they, too, use echolocation to accomplish these tasks!

Regardless of the animal and the habitat, echolocation is a useful tool if you need to “see” in the dark!

One Reply to “Echolocation: how bats use sound waves to see in the dark”