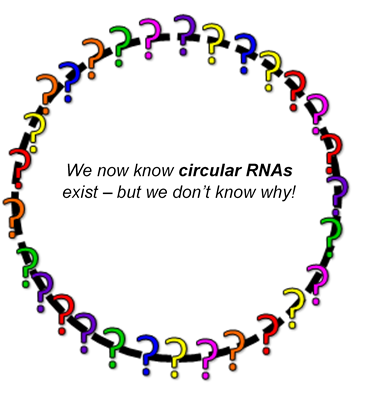 We used to believe the Central Dogma of molecular biology was pretty simple. Every cell contains genetic information in the form of DNA, which is responsible for providing instructions for the creation of proteins, or the molecules a cell needs to do its job. RNA is the linear molecule that serves as the intermediate, transferring information from DNA to the protein production machinery. Some types of RNA can also act more like building blocks or intermediates for other aspects of protein production. Over time, however, we came to realize how grossly oversimplified this Central Dogma is. One such example is the recent surge in the discovery of new types of RNA molecules, including circular RNAs (circRNAs).

In the 1990’s when researchers first discovered RNA molecules that looked “out of order,” they assumed it was due to experimental error or a fluke cellular event. Then about 10 years later, another group discovered these same “out of order” molecules and found they were actually quite common in the cell. Most linear RNA molecules are comprised of multiple segments, and based off of a cell’s DNA sequence, these segments are always expected to be found in a specific order. But these scientists were discovering that the segments can be arranged “out of order” and joined together in a manner that will cause the RNA to circularize. As more researchers published similar results, skepticism diminished, and these circRNAs were eventually accepted to be real.

Intriguingly, these RNA circles are able to survive in a cell much longer than linear RNAs, are abundant in many different cell types, and appear to be associated with many different diseases, including cancer and cardiovascular disease. Researchers are also now discovering specific molecules that seem important for controlling circRNA formation in cells. All of this suggests circRNAs probably do have some biological role, and potentially may be a whole new class of molecules researchers and drug companies could target or exploit to develop new treatments for disease.

It has taken us over a decade to convince ourselves circRNAs are real. Now, we have no idea what they do! But, just because they do not yet have a discovered function doesn’t mean they are not important. Perhaps circRNAs, or some other deviant from the so called “Central Dogma,” are the missing link to why we haven’t yet discovered the cure for cancer. Who knows? Only time (and many experiments!) will tell for sure.