How does a runny raw egg get transformed into one that is edible?

Eggs are probably one of the most versatile foods out there! Many people enjoy them for breakfast as they are, as the main part of a dish, an appetizer, or even as a snack or a dessert. So, how does a runny raw egg become firm once it’s cooked?

As we crack an egg, we see the egg yolk and the egg white (albumen). Both contain mostly water and different types of proteins. These two components are the ones that are responsible for the change in egg texture as the egg cooks.

Like other proteins, the proteins in raw eggs are made of a string of amino acids which have different characteristics and charges (positive, negative, or uncharged). The interaction between different amino acids helps to determine how a protein is shaped, which in turn, determines the protein’s function. Another component that determines protein folding is how they interact with water. Parts of the protein that are hydrophilic (water-loving) will interact with water, and those that are hydrophobic (water-hating) will be faced away from water.

Each protein molecule in the albumen has a net negative charge; because of this, they repel one another. This repulsive force causes raw eggs to have a runny texture. Egg yolk has higher fat content, which can interact with these negatively charged proteins, and thus, diminish the repulsive force. Consequently, egg yolk has a less runny texture than egg white.

As we cook eggs, we are exposing these egg proteins to heat – a form of energy. The longer we expose them to heat, the more we are encouraging these protein molecules to move faster and consequently break free from the weak bond that once holds the different amino acids together. This denaturation process eventually leads to protein unfolding (see figure below, under “cooking eggs”). With continued exposure to heat, unfolded proteins can now interact with other nearby proteins and create a three-dimensional network, which traps water molecules. Since the water molecules can’t move as freely anymore, the raw runny egg has now taken on more of a firm texture. 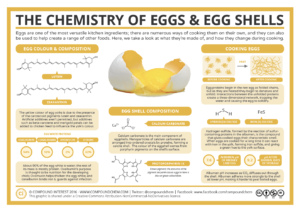 In the case that we forget we have an egg cooking, leaving the egg heated up for a prolonged time will encourage more protein–protein interaction. This leaves little room for water molecules to be retained within the egg. The result? If we were frying or boiling the egg, then it would lose water in the form of steam; if we were making scrambled eggs, then we will see some water separating from the egg. Texture-wise, these eggs will be more rubbery.

With a little more understanding about egg components and an appreciation of science, cooking eggs is not as hard as it’s cracked up to be!