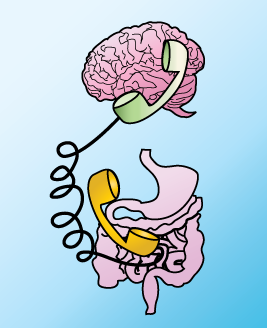 I’ve found that it is rather difficult to write an article when you are lying in the fetal position and afraid to move. No, I wasn’t trying to hide from a T-rex. I was having a migraine attack, and what really kept me curled up was its good friend and accomplice, nausea. According to a 2013 study, over half of migraineurs suffer from this additional punch to the stomach during the majority of their attacks. Is this collection of symptoms merely a coincidence, or are the brain and stomach in cahoots to make people miserable?

The brain “communicates” back and forth with the gastrointestinal tract via neuronal, immunological, and hormonal signals, forming what is now called the gut-brain axis. The link between the immune system and microbes within the body has already been well established, and has recently begun percolating into the mainstream media. For example, podcasts are discussing fecal transplants (yes, really) to combat gastrointestinal disease, and the hygienic hypothesis has parents thinking that maybe they should let their kids eat dirt every now and then to avoid developing allergies. Only recently has the contribution of the brain been thrown into the mix to form the microbiome-gut-brain axis.

The mutual communication between the gut (enteric nervous system) and brain (central nervous system) was discovered serendipitously, with a fascinating backstory. As scientists were attempting to form a link between the immune response, stress, and disease, they discovered that mice, when fed a bacterium that does not trigger the murine immune response but that makes humans sick, exhibited more anxious behavior. Meanwhile, animals raised in germ-free environments were less anxious. As interest in the link between behavior and biota grew, more associations between gut bacteria and emotional changes or changes in an animal’s ability to learn were discovered. This line of research has been taking off ever since. 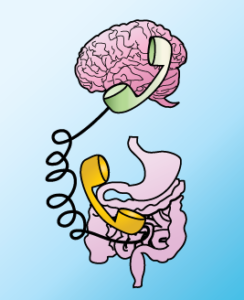 According to PubMed, “gut-brain axis” publications per year recently nearly doubled from 75 (2014) to 146 (2016), and over 70 have already been published in 2017. Thanks to this fervor, preliminary evidence is popping up everywhere linking the microbiome, which is predominantly focused in the gut, to neurological disorders from anxiety to Alzheimer’s disease (reviewed recently in Cell). This is also jumping into the mainstream media, with such catchy headlines as, “A Yogurt a Day Could Relieve Depression.” Always remember to take such information with a grain of salt, as this information is preliminary.

So why did it take so long to find the link between this system? More often than not, scientists have been approaching the human body much like the Blind Men and the Elephant parable*: A neuroscientist grabbed a tusk and an immunologist grabbed a tail. While each scientist can make valid conclusions based on their own observations, neither can fully understand the elephant by themselves. Likewise, if scientists had continued studying the gut and the brain independently, without also considering behavior and learning, we would still be blind to their reciprocal relationship. Now, by investigating neurological health problems from a gastrointestinal point of view and vice versa, we can potentially double the chances of finding treatments for each. There is hope yet for my migraine.

*Special thanks to Dr. Keith Kelley, editor-in-chief of Brain, Behavior, and Immunity for using this in his talk at the 2016 Triangle Society for Neuroscience Spring Meeting!