Are you a visual learner? You know, someone who needs to see a diagram or picture to really learn something. Or maybe you’re an auditory learner? I mean, you are always listening to podcasts and audiobooks, right? Maybe you’re a kinesthetic learner, because you like to play sports and garden? 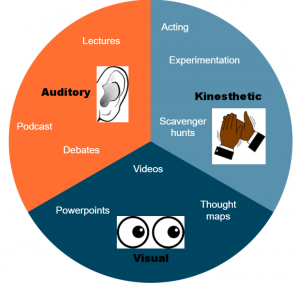 If you were a student in the last five decades, you probably took a quiz (like this one) ostensibly designed to determine your learning style. Your teacher’s quiz probably had you respond to items like:

“I want to learn how to play a new board game or card game. I would:”

As someone who taught high school for a few years before graduate school, I can tell you that my fellow teachers and I were taught to consider learning styles. In 2009, I was trained to think of students as having a preferred learning style that reflects how they need to be taught in order to be most successful in academia. Furthermore, I was taught that a good way to teach is to figure out the learning styles of your students and construct assignments, lessons, and assessments that appeal to their individualized learning styles. So, in my first year of class, I administered a learning styles quiz and taught my students that they are a specific type of learner based on their quiz results.

This reflects the two underlying assumptions of  the “learning styles” approach. First, students have a stable learning style that doesn’t change much over time and can be determined using a questionnaire. Second, students learn better if they are taught (or if they learn on their own) using their preferred learning style.

Unfortunately, there are many problems with this approach. First and foremost, there has never been strong empirical evidence supporting the above assumptions about learning styles. This is the conclusion of a 2009 review of the scientific evidence and the conclusion of another review completed in 2015. A separate 2015 article focused on the two assumptions of the learning styles approach (i.e., learning styles are stable and measured with questionnaires, and they improve achievement). Is there evidence that the visual learners of today will be the visual learners of tomorrow, or in more technical language, are learning style questionnaires “reliable”? The answer from the review: No. Learning styles are not consistent for most people. A learner may be categorized as a visual learner today and take the same assessment a month later and be categorized differently. What about the second assumption that learners perform better when their lessons are matched to their style? Decades of research revealed “no viable evidence to support the theory.” It is for these reasons that learning styles are frequently described as a “neuromyth” in some of the current education research on the topic.

Of course, “there is no evidence” is generally a great reason to cast aside an idea. But, lacking evidence isn’t the only problem with belief in learning styles, there are potential harms. One potential source of harm is that learning styles may reinforce an essentialist view of students’ learning abilities as fatalistically fixed. Essentialism also tends to carry with it the assumption that fixed differences are genetically inherited and are rooted in brain differences. A recent study found that about half of people who believe in learning styles hold fairly essentialist views. Importantly, an essentialist view runs counter to maintaining a “growth mindset” where students are seen as capable of making significant improvements to their intelligence and academic performance, a perspective that is associated with academic improvement.

Beyond the empirical and essentialist problems with the learning styles approach, there are more hidden costs. The learning styles approach is a fruitless blind alley that many teachers invest time, money, and effort into when those resources would be better spent on evidence-based approaches. As a first year teacher, I took up a significant portion of a class administering a survey and painstakingly walking through the “learning styles” concept. I also pigeon-holed students with “individualized” assignments that increased their chances of primarily getting one specific type of lesson instead of receiving a wider variety of approaches in their education. Though, I didn’t do this as much as I could have since it is exceedingly difficult and time consuming to individualize to that level.

Why is the belief in learning styles still so prevalent? In some ways this is the same question we find ourselves increasingly asking in an era filled with misinformation, conspiracy theories, and pseudoscience: Why are beliefs in false and incorrect ideas so prevalent? As with many widely believed falsehoods, there are structural reasons behind misinformation. In the case of learning styles, researcher and school psychologist Dr. William Furey has written about how 29 states require new teachers to be tested on learning styles in order to be accredited. Twenty-one of those states require teachers to complete a “test of instructional knowledge” created by the Educational Testing Service (ETS)  which asks questions pertaining to learning styles. Dr. Furey points out how this incentivizes perpetuating the myth, because you need to know learning styles to pass through the accreditation process. Worse, the inclusion of this debunked concept in the education curriculum pulls time and effort away from evidence-based teaching methods. He bolsters his case by citing a National Council on Teacher Quality’s textbook evaluation, which found that 59% of textbooks do not mention the six highest-impact teaching methods (yet advocate planning instruction around learning styles).

Beyond these structural issues, learning styles appeal to our intuitive perceptions of ourselves and others. It seems like people tend to be better at some things over others. It makes sense that matching a person with what they prefer would make them more successful. We generally struggle to understand how behavior emerges from the complex interactions between our biology and our environments. Learning styles are another appealing overly simplified categorizing system, like astrological signs, Myers-Briggs personality types, and whatever sigma, alpha, and beta males are. Unfortunately, these categorization systems aren’t supported by evidence and can even lead to harmful consequences.

Follow Manuel Galvan on Twitter and read more of his writing on the Pipette Pen and on his blog, The Science of Social Problems. Or check out his new Youtube Channel with the same name!