You won’t get infected with an antibiotic-resistant bug…or will you? 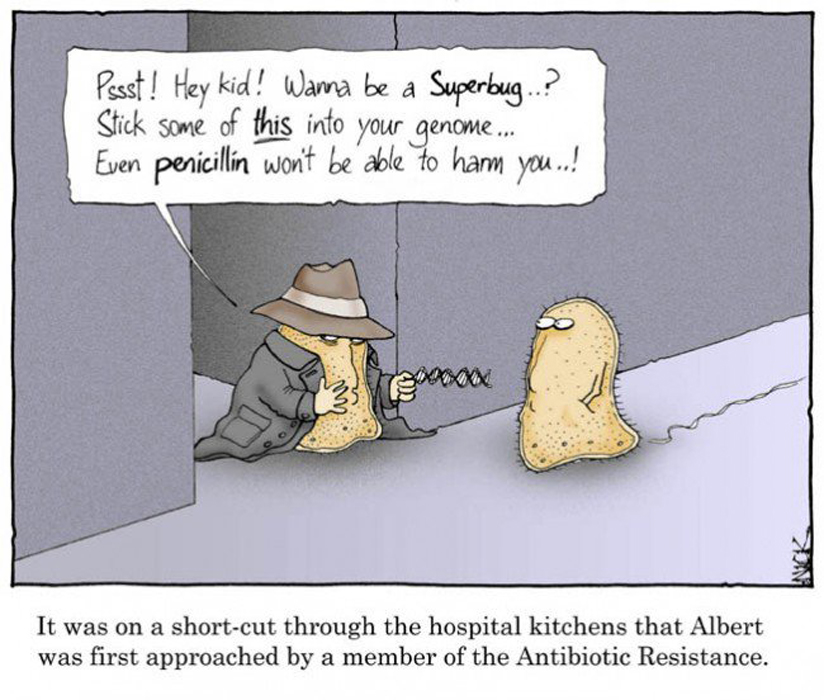 Have you read about the woman in Nevada who died after being infected with a “superbug” resistant to all available antibiotics? You could consider this a rare occurrence, but these kinds of cases may become more and more common as germs, such as bacteria and fungi, ‘outsmart’ all antibiotics and live happily ever after. According to the Centers for Disease Control (CDC), the federal agency tasked with increasing the health security of the United States, this “post-antibiotic era” is not a problem of the future, but rather of the present. Earlier this month, the CDC published an updated report on Antibiotic Resistance Threats in the United States, which follows the first study of this kind published in 2013. What did I take away from this 148 page report?

There are over 2.8 million of antibiotic-resistant infections in the US every year. To put that into perspective, that could translate to every person living in Chicago, the third largest city in the US, being infected at some point during the year. And while reported deaths have been decreasing since the 2013 report, 35,000 patients still die each year. However, it’s not just the superbugs causing trouble.

Instead, the biggest killer is an organism not considered to be widely antibiotic-resistant. This organism, a bacterium called Clostridioides difficile (also known as C. diff) alone is responsible for almost 13,000 deaths. C. diff is associated with antibiotic use – when the good bugs in our gut get wiped out by antibiotics, C. diff is able to get the upper hand and cause diarrhea, colitis, and potentially death. Scientists around the world are working hard to better understand C. diff to prevent infections and improve disease outcomes. I am proud to be a part of these efforts as a PhD student in the Tamayo lab at the University of North Carolina at Chapel Hill.

While we most often hear about antibiotic-resistant bacteria, resistant fungal infections are rising in prominence as well. Specifically, Candida species and Candida auris (C. auris) in particular have emerged as an important threat. C. auris is quite unique among the group of 18 organisms classified by the CDC as urgent, serious or concerning. C. auris was not listed in the 2013 report, but is now one of only five organisms classified as “urgent”, the highest level of concern. This is largely caused by the propensity of C. auris to spread easily between patients, especially in hospitals and nursing homes, through contact with contaminated surfaces, or from person to person. Increasing resistance of C. auris to all three classes of antibiotics used to treat fungal infections is also alarming.

We all play a role in preventing further spread of antibiotic resistance, protecting ourselves and others. First and foremost, you should always finish a full course of antibiotics even if you start feeling better before the final dose. You should not pressure healthcare providers to prescribe antibiotics as a “treat all” remedy – antibiotics will not treat the common cold or flu, which are caused by viruses. An antibiotic-resistant infection may happen to you, a family member or a friend as none of us are completely ‘immune’. Let’s work together to battle this problem head on!