Melatonin is an over the counter supplement that is often used as a sleep aid, What is it? Is it safe? Is it effective? Read to find out

Sleep is a behavior that everyone loves. As a scientist that studies sleep, people often ask me, “How can I fall asleep when I want to for as long as I need to?”. We all know the dreaded feeling of relaxing, dimming the lights, and closing your eyes, only to have your mind light up with endless though

ts and commotion. This is very common with roughly 60% of adults already experiencing some form of insomnia weekly, and this number has spiked recently with the stress and insanity that has been 2020. As such, many people are looking for sleep aids that can help them fall asleep. One of the most commonly used sleep aids is melatonin. But, what is melatonin? Is melatonin a bottle of dreams waiting to happen or a bottle of lies that has no effect on pre-sleep restlessness?

Melatonin is a molecule naturally made in your brain, that helps you feel sleepy at night. Melatonin is created in the pineal gland, which is a pea sized gland in the middle of the brain. The pineal gland is controlled by the suprachiasmatic nucleus (SCN). The SCN is a brain region that regulates numerous circadian rhythm functions, such as how your body temperature changes throughout the day. The SCN regulates melatonin based on how much light, specifically blue light, is exposed to your retina. Light causes the SCN to inhibit pineal

gland activity and a lack of light causes the SCN to activate the  gland and melatonin production (see the mechanism depicted to the right). This increase in melatonin inhibits SCN activity pushing for ‘night time based’ circadian activities to occur, such as lowering body temperature and feeling sleepy.  In brief, your body can regulate melatonin levels based on external cues like light from the sun (see side note below), allowing you to begin to feel sleepy at night. 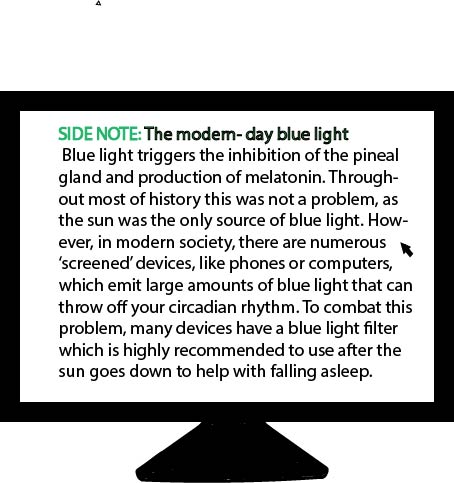 So melatonin itself is natural, how about the supplement and is it safe to use?

Taking a melatonin supplement increases melatonin levels which should make you sleepy prior to going to bed and make it easier to fall asleep. Studies have shown that melatonin production naturally ramps up 2 hours before bed to push the body into ‘sleep mode’, by inducing several functions such as reducing heart rate and body temperature. When you take a melatonin supplement one hour before you want to fall asleep it further ramps up this ‘sleepiness’ process. It is recommended to take 1-3mg which is several times higher than the natural amount in the brain. Common side effects of this supplement include headaches, especially after the first use, and drowsiness. In general, side effects are minor and can further be reduced if you ensure that you can get 8-9 hours of sleep. Additionally, taking 1-2mg of melatonin should be safe for up to three months of use. Continued use longer than three months should be safe as well; however, studies have not been done to prove the safety of extended use past three months.

So is melatonin a bottle of dreams?

Well it depends on what you need help with. If you recently traveled cross country or are trying to go to bed hours before your normal bedtime, melatonin is for you. However if you have problems staying asleep, melatonin may not benefit you. Additionally, the most beneficial melatonin you have access to is the melatonin already bottled in your head. Reducing your screen time, using blue light filters, and dimming the  lights an hour before bedtime can greatly help with naturally syncing your body’s melatonin with bed time.

Melatonin: Abottle of dreams or a bottle of lies?