When I was just 5 years old, I was lucky enough to see a sea turtle nest emerge on the coast of North Carolina. While at the nest emergence, I learned that you could only use red lights on turtle nesting beaches in the summer.  Why the red lights? Well, sea turtle hatchlings use moonlight to find the ocean, which is white. White flashlights mimic the moon, which disorients the hatchlings and causes them to wander towards the dunes, towards houses, or just circle endlessly on the sand until they are eaten by a ghost crab, a bird, or even fire ants. This experience with sea turtles sparked my interest in their biology, and inspired my journey to become a marine biologist.

It has been decades since I first saw hatchling sea turtles crawl down a beach, but the issue of lights on beaches still exists. On every beach I’ve worked on, from Florida, to North Carolina, to Costa Rica, I’ve watched turtles crawl towards the dunes instead of the sea. Because unfortunately, it isn’t just white flashlights that affect sea turtles, but light pollution overall. 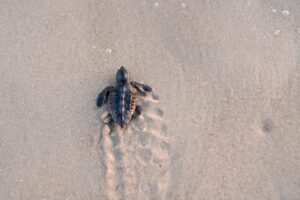 Light pollution comes in several varieties: A few of these include sky glow and glare. Sky glow describes the glow of light that can be seen over populated areas. Glare is the bright light from unshielded lighting and scatters the light that enters your eye, sometimes causing temporary blindness.  On beaches, sky glow is a big issue. The lights from hotels, houses and cities draw turtles in the wrong direction. Countless hatchling sea turtles have wandered into the road, into swimming pools and into dunes instead of making their way to the ocean. Not only that, but many visitors to beaches are unaware of the rules and continue to use white flashlights during turtle nesting season. If you’re suddenly thinking, “uh oh… I don’t have a red flashlight…”, don’t worry, because there’s an app for that!

Other wildlife are affected by light pollution as well. Birds are known to collide with buildings due to light emissions, and some species begin nesting earlier when exposed to light pollution. Insect population numbers have drastically decreased in recent years, in part due to excess anthropogenic light. Fireflies in particular have issues finding mates with the extra lights.

So, what can you do to combat light pollution and help sea turtles and other wildlife?

Here are a few suggestions:

Use LEDs or compact fluorescent lights

Don’t use blue lights! They increase glare and compromise vision.

Take red lights with you to beaches

You’ll be amazed at what you see by stepping onto a dark beach without a flashlight – the whole sky comes alight with stars, and you may just spot a hatchling turtle or two making their way down a beach! 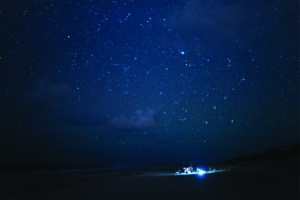